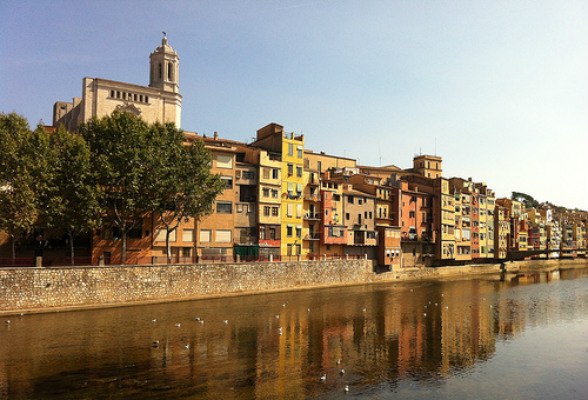 Most people who arrive at Girona airport seem to head straight in the opposite direction for its bigger and better known sister  Barcelona, but they’re missing out on a gem of a city that’s perfect for a short break. Clearly the Costa Brava Tourism board, who were sponsoring the TBEX conference that I attended, had the same thought in mind in bringing a flight of travel bloggers here and keeping them as long as possible to discover all corners of the region from the Pyrenees to the beautiful coastline. Personally I really enjoy the less discovered cities of Europe like Girona, where you get a local and authentic flavour, rather than the tourist hot-spots where you have to compete with the crowds to see the top attractions. 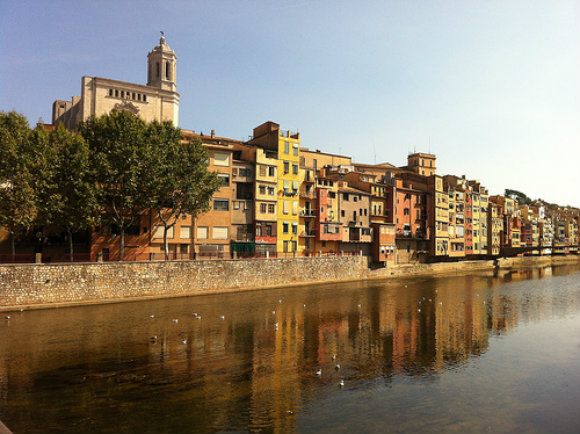 Pretty houses by the river in Girona in Spain

The walk from the bus station to my apartment near the cathedral, booked through Wimdu, should have taken 20 minutes, but by the time I’d meandered past small squares with children’s playgrounds and down cobbled streets where I window-shopped for everything from clothes to delicious pastries, an hour must have passed.

I hope you enjoy my travel video of Girona below

If you can’t see the video above, view it on my blog or view on Youtube

I reached the river that runs through the heart of Girona and stopped a while to enjoy the view of the pastel painted houses that face the river, that are the icon of Girona, just as the Clifton Suspension bridge is for Bristol or the Eiffel tower for Paris. And talking of Monsieur Gustave Eiffel there’s even a bridge designed by him of over-sized meccano that crosses the river, giving you a view of those painted houses framed in the red latticework, with the perfect ice cream shop at one end. 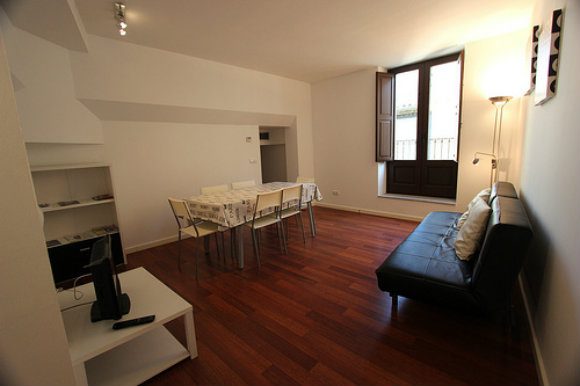 Our Wimdu apartment in Girona

Having crossed the river I found myself in the heart of old Girona, walking along a narrow street with the wheels of my carry-on case bumping along the cobble stones. Here were restaurants and small individual shops lining the roads that lead me towards the cathedral. I caught glimpses of steps and winding passageways in the old Jewish quarter, finding the Cathedral in an enclosed square with steps leading steeply up to it. I never got to look inside the Cathedral while I was in Girona and I was never quite sure whether the many buildings, doorways and flights of steps were all to the same cathedral or whether there were several different churches bunched together. 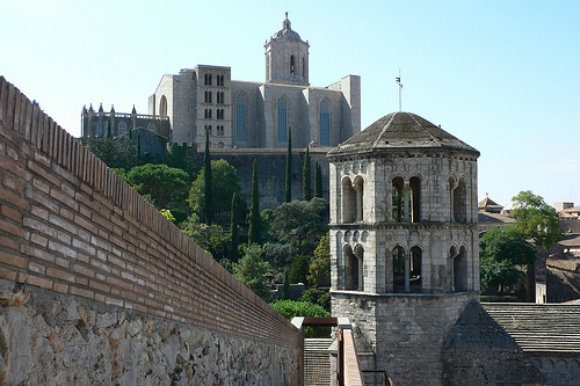 View of the Cathedral in Girona, Costa Brava, Spain

I reached the office of Giro Rooms, who manage the apartment that we were to stay in, only to find that it would be another couple of hours before we could get in to our apartment, so I left my bag in the office and set off to explore a bit more of what Girona had to offer. At the end of the street I could see the Cathedral high up on the hill and finding some steps marking the John Lennon gardens I was intrigued and followed them up. They led me to a walkway in the sky, on top of the old city walls which had been restored with a path running all the way along the top. They ended abruptly with a view of the cathedral, but I learned later from the map that there were several stretches of these old walls in Girona where you could get a view over the city.

From up here, I could look down on all the terracotta roofs and roof terraces, nosing into other peoples’ lives and playing a game of “Which house would I like to live in?” The afternoon passed and and finally I returned and was let into our Wimdu apartment which was housed in an old building that had been renovated. 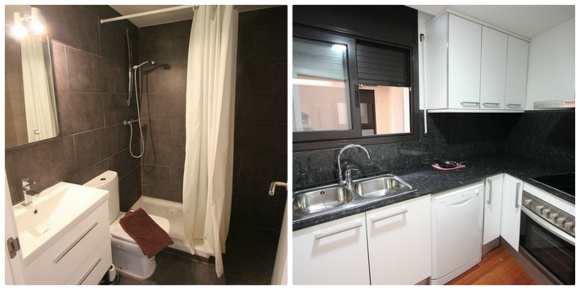 Bathroom and Kitchen in our Wimdu apartment in Girona

I met up with the other travel bloggers who were my flatmates for the weekend, my old online friend Barbara from Hole in the Donut who I was meeting in person for the first time and new friends Laurel from Monkeys and Mountains and Isabel from Diario de a Bordo. It was clear that the old building layout didn’t quite match the new apartments that had been fitted into it, as here and there was a supporting pillar in the wrong place or a wall where one would never have been. The three bedroom apartment was all new and modern, pleasantly furnished in that style of well designed but inexpensive furniture and we quickly made ourselves at home. As bloggers one of our first checks of the apartment was the strength of the wifi signal, which was passable but not exactly fast -as the lady in the office explained, the thick walls of the old building didn’t help. 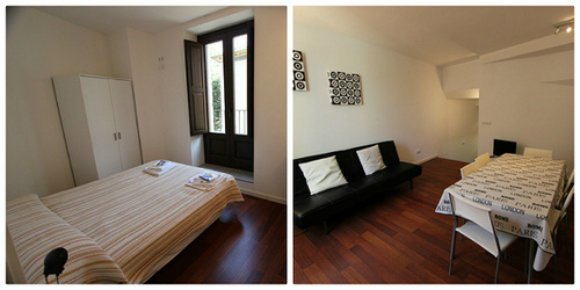 Our Wimdu apartment in Girona

The couch went down to be a sofa bed and each of the bedrooms had a colourful throw for a bedspreads. The kitchen was small and modern but had most of what we needed considering we were not planning a lot of eating in – and why would you when the best bars and restaurants of Girona were on your doorstep? The apartment was ideally located on the edge of the old town area, a little away from the hustle and bustle but only a 5 minute walk from the cathedral. It was also an easy 20 minute walk to the Girona Gonference Centre, but I much preferred staying in the old town where most of our blogging friends congregated at the end of the day for drinks and pinxtos.

Just down the street were a number of small fruit and grocery shops where we could buy everything we needed to keep us going between the conference and eating out. Another big benefit was that the cost of the apartment, shared between the four of us, was well below the cost of a hotel room, making this a really affordable option for a group of friends. I loved the way that being in an apartment together allowed us to have so many discussions that went well beyond the normal chit chat at blogging get togethers. If all the exciting plans and possibilities that we discussed come to fruition, our lives and our blogs will be thriving many years from now. 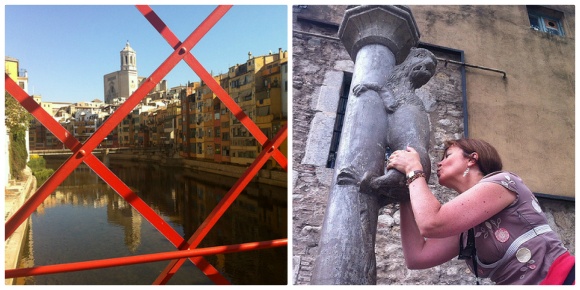 Left: The Eiffel bridge in Girona Right: Kissing the lion’s bottom in Girona

Because of the various parties laid on for TBEX, it was only on the final night that I got to explore some of the restaurants in Girona where you could find anything from slices of freshly cooked pizza, to colourful Pinxtos in the bars, to pretty tables set outside the restaurants in the open air . I loved tasting all those pinxtos, and one evening when I needed a late night snack I asked in one bar if they could do me a takeaway and they found a little cardboard box to take back to the apartment.

What I’ll remember of Girona is the golden light on the stone of the old quarter, those pretty ice cream houses by the river and the great company in our little Wimdu apartment. Oh, and of course I kissed the lion’s bottom so I’ll return again to Girona.

More things to see and do around Girona

We booked our apartment in Girona through Wimdu.com who have Holiday Apartments and Bed and Breakfasts that allow you to live like a local and have a more authentic travel experience. You can follow Wimdu on Twitter @Wimdu and Facebook. The apartment that we booked was managed by Giro Rooms who have a number of apartments in Girona. An apartment like ours with 3 bedrooms in Girona typically costs from €100 a night. My thanks to Wimdu and Giro Rooms for hosting our stay.

This article by Heather Cowper is originally published at Heatheronhertravels.com