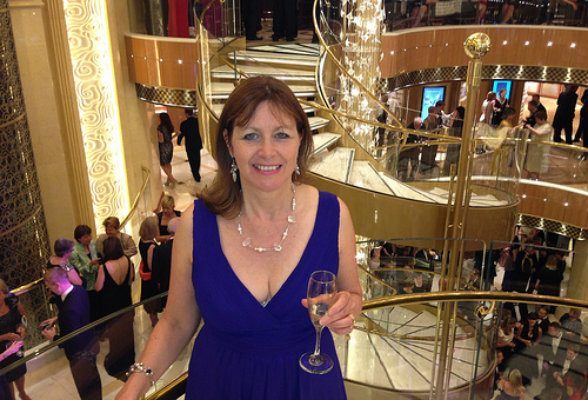 Royalty and cruise ships seem to go together like champagne and smoked salmon, strawberries and cream or perhaps sunshine and showers that seem to represent the English weather in June. It was the Royal connection that brought me to Southampton this week, as I was invited to experience the naming ceremony of the new Royal Princess cruise ship by the Duchess of Cambridge. There’s a long tradition of each cruise ship having a godmother to name her; Diana, Princess of Wales was godmother to the first Royal Princess ship and other Princess Cruises godmothers have included Audry Hepburn, Sophia Loren and Margaret Thatcher. Surely every ship needs to have an elegant and notable woman to act as her patron and bless her future voyages. 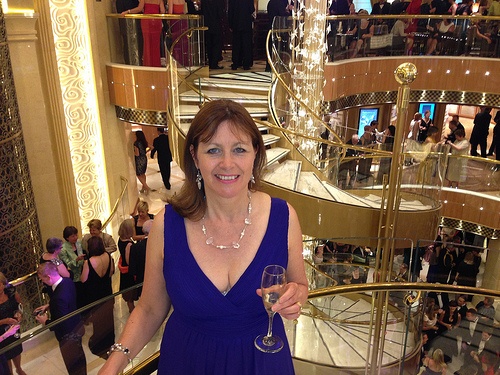 Enjoying a glass of champagne in the Atrium, Royal Princess

I arrived in Southampton with my husband Guy, and our exciting evening on board the Royal Princess started with tea and cakes as we relaxed in the Atrium at the centre of the ship, somewhat dazzled by all the glamour and glitz of our first cruise experience. The Atrium had all the Pzazz of a Hollywood musical with polished marble floors, sparkling chandeliers, columns of glass stars and two gilt and glass spiral staircases at one end for making a grand entrance. 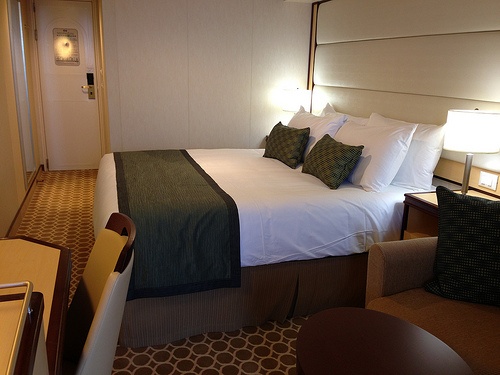 My Stateroom on the Royal Princess

We made ourselves at home in our Stateroom, which was tastefully decorated in neutral shades of green and tan with a modern white shower room and large wardrobe area for all the outfits we might need to look our best on longer voyages. There was even a proper balcony with an easy chair to sit outside, although the current view was of the Southampton dockside, so we had to close our eyes and imagine a sea of sparkling turquoise in the Mediterranean.

If you can’t see my video about of the Royal Princess, view it on my blog here or on YouTube here

Once we had changed into our evening finery, we descended to the Atrium to circulate with a glass of champagne in hand, before meeting our dining companions at our table for the gala dinner. There are a number of elegant restaurants on board and we were seated in Concerto, which like the others had a musical theme and we were seated in front of a large mural of a classical pianist playing with a backdrop of the spires and domes of Venice. The delicious gala dinner included a tian of crab and lobster followed by a pave of beef tenderloin and a smooth trilogy of chocolate for desert – take a look at what we ate in this little Vine video I made. 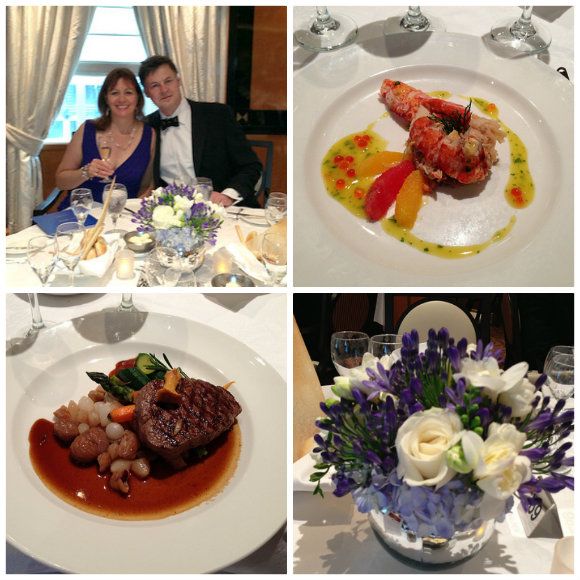 Gala Dinner on the Royal Princess

After dinner I found my friend Shannon Hurst Lane of Traveling Mamas who had flown all the way from the USA for the Royal Princess inaugural celebrations. As often happens with travel bloggers, we had become friends online and so it was a thrill to finally meet Shannon in person and chat about our blogging and non-blogging lives on opposite sides of the Atlantic. Shannon had gone for drop dead glamour and been dressed for the occasion by Louisiana based couturier, Harold Clarke in a foxy green and black lace gown which made me wonder why I’d left my tiara at home! 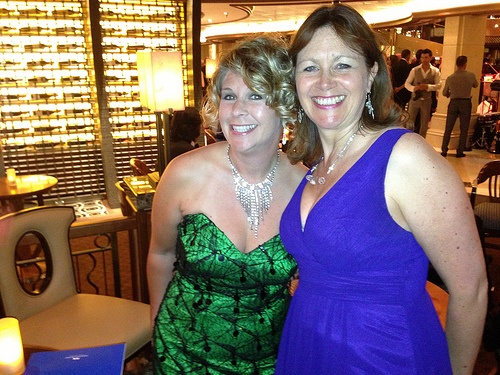 Heather and Shannon Hurst Lane at the Gala on Royal Princess

The gala entertainment continued around the Atrium as we were entertained by the gorgeous singer, Beverley Knight whose performance I had a bird’s eye view of from the top of the spiral staircase, followed by the Beatle Maniacs who had Shannon and me bopping to Twist and Shout on the dance floor. 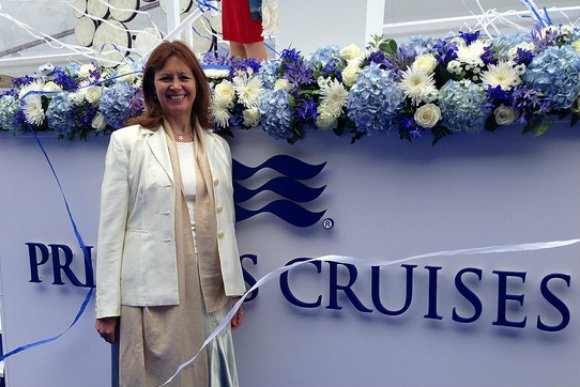 At the Royal Princess naming ceremony

After breakfast, my husband Guy had to leave to get back to work, so Shannon and I headed down the gangway with the rest of the guests for the naming ceremony on the quayside. Pausing only for a quick photo in front of the stage to prove we were really there, we headed for the far end of the seating and managed to get seats close to the front opposite the champagne bottle, where we had a fantastic view of the stage where the royal party would sit. Excitement was building as the band of the Royal Marines Portsmouth marched up and down in front of us, followed by the pipers from the 1st Battalion Irish Guards looking very dashing in their kilts. 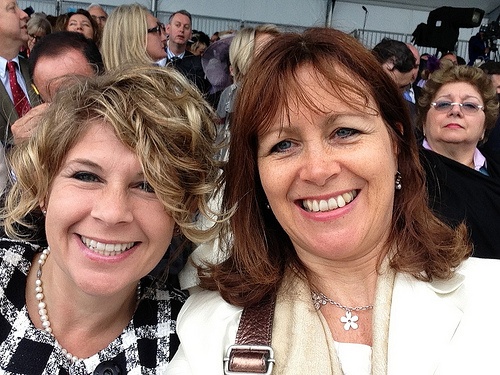 Heather and Shannon waiting for the Princess to arrive – do we look excited?

Finally we could see on the big screens that the Duchess of Cambridge had arrived and was being escorted from her car onto the stage. She looked really blooming with elegant high heels and a black and white Dalmatian spot coat which skimmed over her neat baby bump, as her first baby is due to arrive in only a month. Once the Duchess was seated, we were entertained by singer Natasha Bedingfield who performed her hit, Unwritten (watch my video here), followed by West End star, Kerry Ellis and then some earth harp music from the band Mass Ensemble.

The big moment had arrived as Kate stood up, walked up the few steps up to the podium, and said the words we had all come to hear; “I name this ship the Royal Princess, may God bless her and all who sail in her” (watch my video here). Then she was handed the scissors by Captain Tony Draper and cut the ribbon to release the champagne bottle which smashed with a satisfying explosion of glass and foam on the side of the ship. Kate looked rather pleased and relieved – I think I saw her mentally saying Phew! that the bottle had smashed first time. 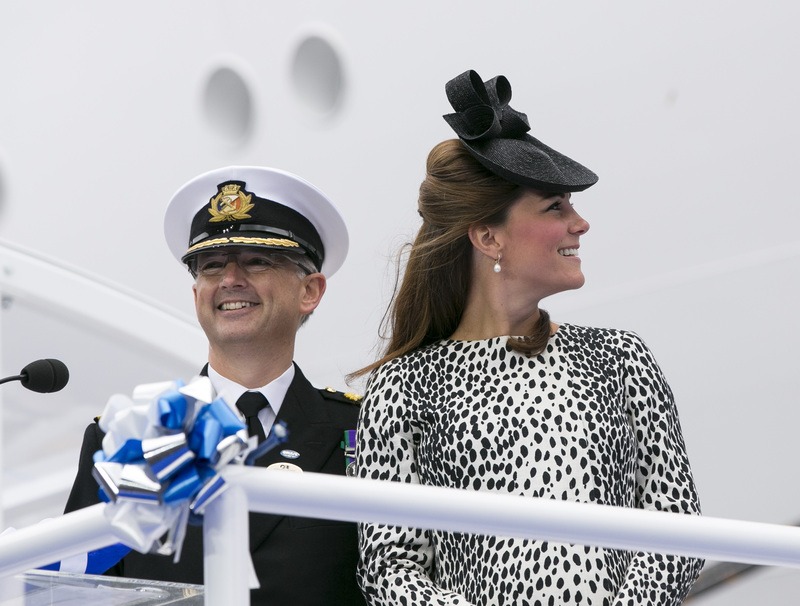 The Duchess of Cambridge at the Royal Princess Naming Ceremony

As the Duchess of Cambridge left the stage for a tour of the Royal Princess, we and the other guests made our way back onto the ship for a light lunch, this time in the Symphony restaurant. Shannon and I both agreed that our blogs had taken us to the most amazing places and given us experiences like this that money just couldn’t buy – we were both very lucky girls! After lunch we said goodbye and I took the opportunity for a proper look at the upper decks of the Royal Princess, which I hadn’t yet had time to explore. 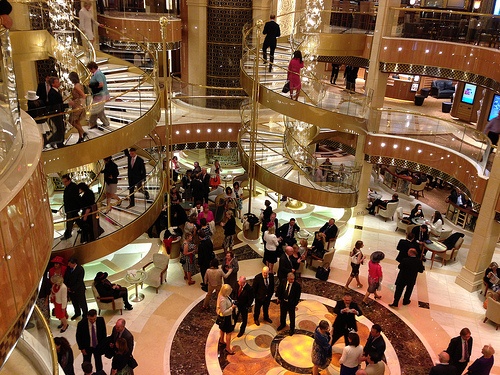 The Atrium on the Royal Princess

Unfortunately, the English weather was not being kind, so I had to ignore the grey clouds and imagine I was in the Caribbean, treating myself to a soft cone ice cream, cooling off in one of the pools with the palm trees swaying in the breeze or topping up my tan on the sun lounger. For extra peace and relaxation I took a quick tour of the adults only Sanctuary where for an extra charge you can have complete peace away from the crowds, hire a sunbed or cabana and have a picnic basket delivered to you – pure bliss! 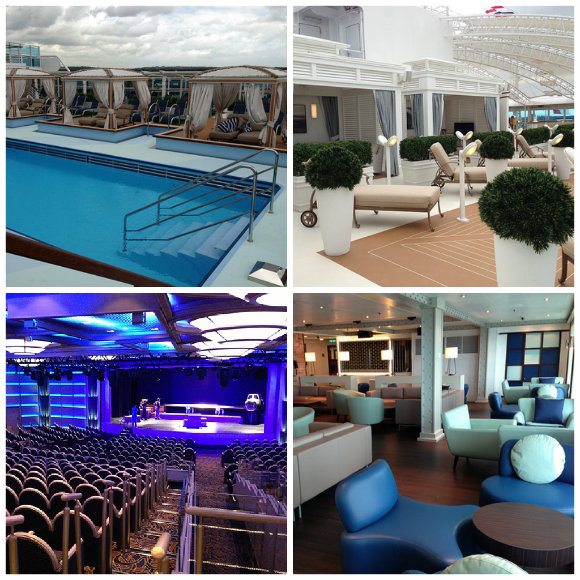 Around the Royal Princess

Bearing in mind that these days, cruising is a family affair, I was very impressed by the different lounges and deck areas that were available for younger guests. The Princess Pelicans (age 3-7) has play areas and arts and crafts sessions; Shockwaves for age 8-12 has a giant TV, games stations and area for pizza and ice cream parties, while I could imagine my teenagers having fun in Remix (age 13-17) hanging out in the outdoor lounge or mixing music like a professional DJ. The area looked so much like a hyper trendy cafe, that I felt quite jealous that I probably wouldn’t be allowed in. 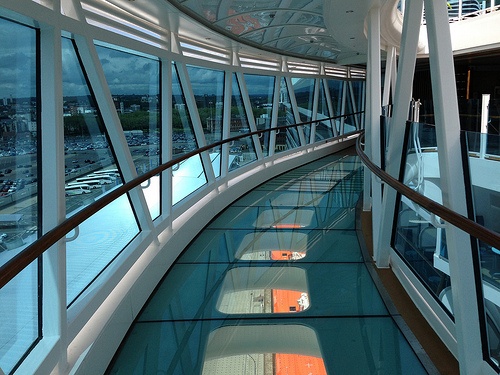 Seawalk on the Royal Princess

My final stop on the mini tour was the Seawalk, the new feature of the ship that everyone had been talking about; a glass bottomed walkway that extends out from the ship. As I looked down through the glass I could see the vehicles on the dockside below, but just imagine what it would be like if there were any whales or dolphins in the sea below. Check out my little Vine video of the Seawalk here.

Later that afternoon it was time to leave the Royal Princess, as it was due to sail on a mini cruise the following day to Guernsey. It had been a whirlwind visit, packed full of fun and excitement, with the extra thrill of seeing the Duchess of Cambridge name the ship. Thank you Princess Cruises for making me feel like a Princess for a day. Fortunately, Guy and I will be back for more fun in September when we take a mini cruise from Southampton to Rotterdam and Guernsey on the Crown Princess, and hope to experience some more Princess magic.

Thanks to Princess Cruises for inviting* me to share the special gala evening and Royal Princess naming ceremony.