Tagines and fresh orange juice – the food we enjoyed in Morocco 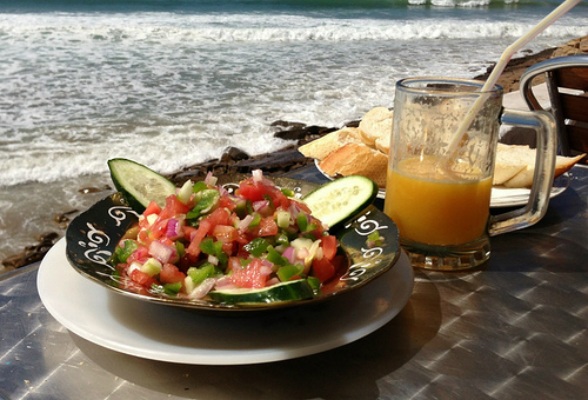 My recent trip to Marrakech has brought back mouth-watering memories of last year’s trip to Morocco with the family, when we stayed in Taghazout, the surf-capital of Morocco. Our week was spent in an apartment that overlooked the ocean and we spent our time either trying to surf (the kids) or hanging out in the many little cafes along the sea front (me) surfing in our imagination while sipping a refreshing orange juice or a sweet mint tea. 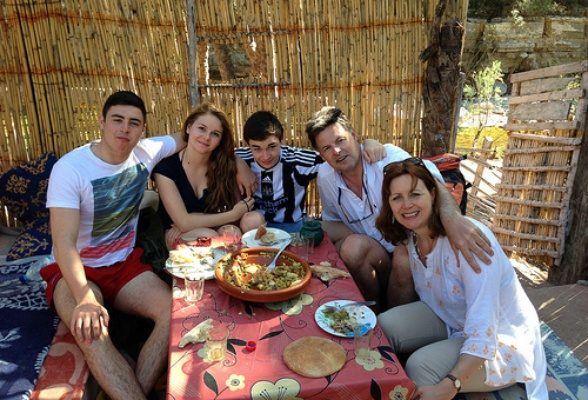 We were there around Easter a year ago, and since Morocco is a warm and sunny spring destination and a number of airlines, such as Monarch offer cheap flights to Agadir, there’s really no excuse to go. Here are some of the happy food memories from our trip to Taghazout and Agadir to tempt you; 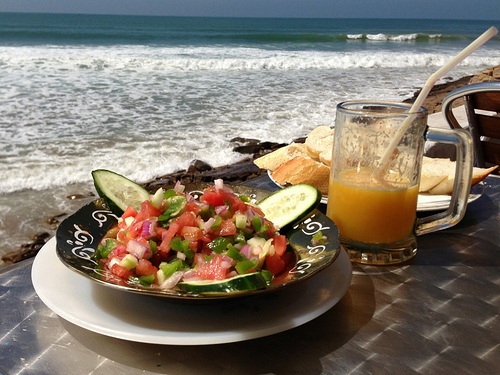 Moroccan Salad and orange juice at Taghazout in Morocco

Because of the years that Morocco was under a French protectorate, it’s easy to find delicious freshly baked baguettes as well as the more traditional Moroccan flat-bread to eat for breakfast. With it we tried the local Amlou, a dip made of ground almonds, Argon oil and local honey which was so moreish that we had to bring a jar home with us. It makes a smooth, oily mixture, a bit like runny peanut butter to dip your bread into and on one of our day trips we stopped at the Argon oil co-operative to learn how the argon kernels are pressed to make the oil used both in cooking and in skin and hair preparations.

Lunch was often a Moroccan salad which is served in all the cafes and restaurants as a side dish or starter, preferably with a view of the expert surfers twisting and turning their way into the beach. The salad is made from the vegetables that most families might have growing in their back garden, chopped small, such as tomatoes, cucumber, green and red peppers and red onion tossed in vinaigrette and served with French bread. 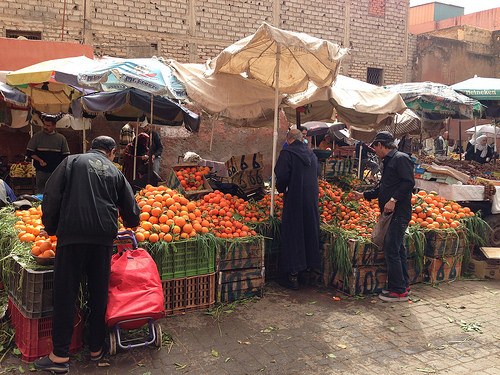 Being a Muslim country, alcohol is not generally served, except in cafes and restaurants that cater for Europeans, but instead we drank gallons of freshly pressed orange juice. In the markets you’ll see huge stalls full of oranges waiting to be taken home and pressed into juice and we also came across a few juice bars that sold more interesting juice combinations, using carrots, beetroot and ginger such as the kiosk next to L’Auberge in Taghazout. 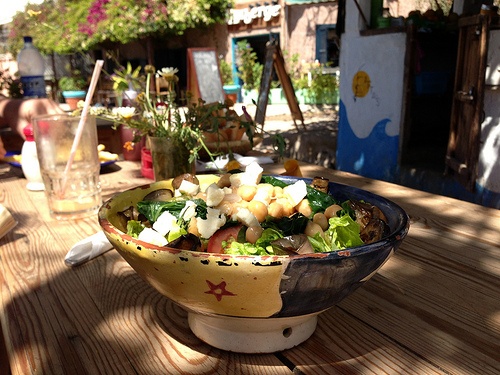 Another ingredient that featured in many of the Moroccan dishes we ate was chickpeas, which is made into hummus but also used in the green salad that we often ordered, mixed with other Mediterranean ingredients such as tomatoes, black olives and goats cheese, or cooked in tagine dishes in place of meat. 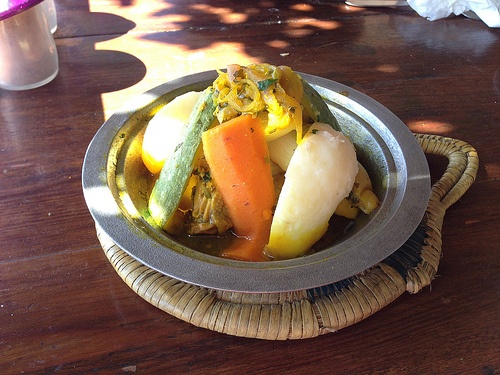 Tajine at L’Auberge in Taghazout

A staple of the North African cuisine is of course couscous, a small grain that is steamed and then served with oven cooked vegetables and sometimes pieces of meat or chickpeas. I began to realise that the same repertoire of Moroccan dishes appears in almost every restaurant, from the street-food vendor to the smart restaurant, so you are often paying more for the décor and ambiance of the restaurant than any difference in the style or quality of the food.

We ate couscous several times in different variations in Taghazout, from the elegant French-style version at L’Auberge, to a party version for the guest night put on by the owners of the Surf’n’Stay apartment where we stayed, as well as a home cooked version prepared over the open fire after our walk up to Paradise Valley. Each time there is a base of cooked couscous in the bottom of the clay tagine dish, topped with chunks of meat and then a layer of large vegetable pieces, such as carrots and courgettes and potatoes laid over the mound of couscous, with a dish of spicy harissa sauce of the side or poured over the top to give extra flavour. I gather that the French almost regard couscous, which they inherited from their North African colonies as a national dish, just as we Brits love a good curry even though our Indian empire is long gone.

Couscous at Paradise Valley near Agadir

The final favourite that we discovered in every restaurant was the Tagine, which refers more to the style of oven cooking in a clay pot than to any specific combination of meat and vegetables. Just as we might talk about a stew or casserole cooked in the oven, the Moroccan tagine dishes rely on being cooked oh so slowly in the oven (think six hours). Since every neighbourhood would have a hammam, you might leave your tagine dish with the man stoking the wood fired boiler for the hammam and come back a few hours later after your bath to pick it up for your lunch.

Chicken with apricots in Morocco

The tagines we tried seemed to often combine meat with fruit flavours, such as lamb cooked with prunes or chicken cooked with preserved lemons and green olives which were delicious.

I know that in a week near Agadir we only scratched the surface of Moroccan cuisine and were probably experiencing the tourist favourite dishes. From reading some of the Moroccan Food blogs out there such as The View from Fez and Maroc Mama I know there is plenty of variety in Moroccan home cooking, so if you are tempted, I commend some of their recipes to you. Enjoy!

Paradise Valley – blue pools and Waterfalls in Morocco
Life’s a beach – watching the surfers in Taghazout
Marrakech – on shopping, sightseeing and (not) getting lost in the souk

This article was brought to you in partnership with Monarch Airlines who fly twice a week from Manchester to Morocco.