How to spend a magical day at Disneyland Paris 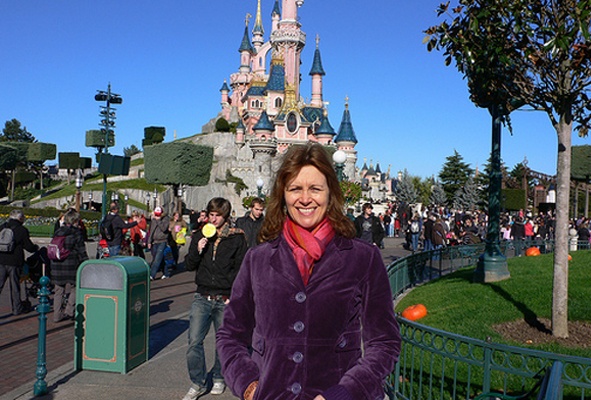 On fine autumn morning Heather and her family (a.k.a The Four Bears) closed the door on their Eurocamp mobile home, and set out across the French countryside for Disneyland, close to the great city of Paris. The sun was shining and there was a dusting of frost on the freshly ploughed fields. 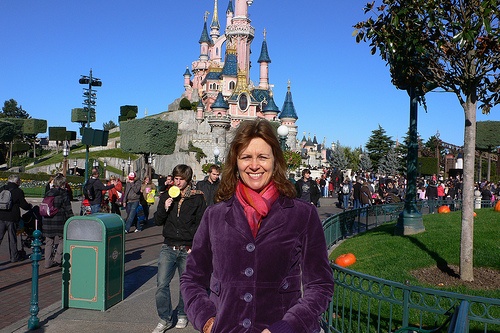 As they motored along, Daddy bear was day-dreaming of country walks and a warming bowl of cassoulet, but the teenage bears were very excited about their first trip to the Disney magical kingdom. Princess bear had even put on her pretty bridesmaid hairband to look her best for the occasion, just in case she happened to meet a handsome prince.

Meanwhile, Mummy bear was hoping the queues wouldn’t be too long or the meals too expensive and had taken the precaution of buying four Quiche Lorraine, even though she knew that le picnic was strictly interdit in the magical kingdom (thank you for your understanding). She wondered whether they would get the Fast Pass she’d heard so much about and wished she’d had more time to research which of the rides they should try first. 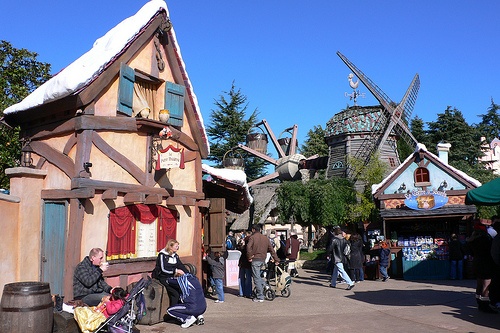 They parked the car, jumped on the magic escalators just like at the airport, and filtered through the various gates and checkpoints, pausing only to pay several bags of gold, and finally they were inside the Disneyland Park. Mummy bear had read somewhere that it was better to turn right than left and the little bears had heard that the Toy Story rides were great, so they first entered Discoveryland. They worked out the Fastpass system (get a ticket and come back some hours later to get on without queuing) and took one for the Buzz Lightyear Laserblast, then noticed the enormous Space Mountain Mission 2 looming ahead of them, so though they’d better give that a go.

Princess bear insisted on sitting in the front carriage of the rollercoaster to get the full effect but Mummy bear closed her eyes tightly for most of the time, as she had never been on a space mission before. She liked the slow bits when they drifted through the stars but felt a bit sick as the space capsule careered through the universe. Master bear sang a chorus of the Beatles song ‘Let it be’ at the top of his voice through all the scary bits, although whether it was out of fatalism or exhilaration was difficult to tell. It seemed to be over quite quickly and Mummy and Daddy bear staggered slightly as they emerged from the space capsule, although the little bears were bouncing with joy.

Next they went 20,000 leagues under the sea into the Nautilus submarine, passing authentic Victorian furniture, oil paintings and leather bound books, and spotting through the window a gigantic octopus that seemed keen to gobble up the Nautilus with them inside. 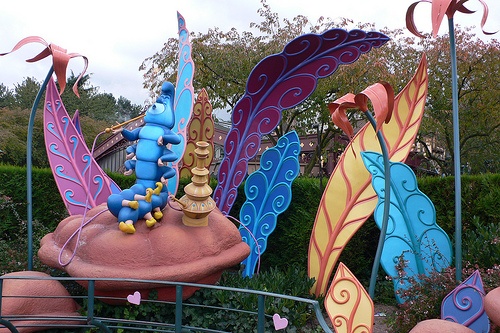 The Labyrinth at Fantasyland, Disneyland, Paris

They decided to visit Fantasyland, the pink haven for all little princesses, snow whites and sleeping beauties, with endless thatched cottages, merry go rounds and sweetie shops packed with sugary delights. The happy scene was disturbed only by Cinderella’s horrid stepsisters who ran around in brightly coloured nylon costumes and wigs, berating each other loudly and curtseying to any passing strangers.They climbed the twisty stairs of the Sleeping Beauty Castle with carved stonework and scenes from the fairy story immortalised in stained glass, then stopped for a coffee next to Alice in Wonderland’s curious labyrinth. Drawn inside they found a maze of hedges, taking them past grinning Cheshire cats, smoking caterpillars and a curious tower that they climbed to get a view over the many attractions of Fantasyland. 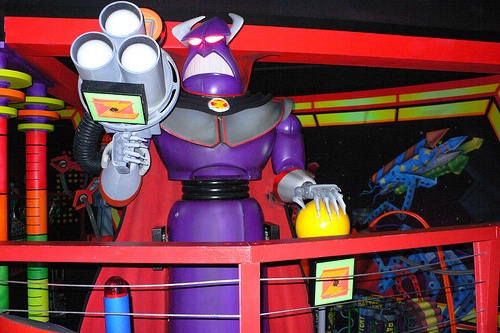 By now it was time to return and take advantage of their Fastpass ticket, to enter the Buzz Lightyear Laser Blast ride, which was a lot less scary that the Space Mission rollercoaster. This was all about good old fashioned, shoot-em-up fun with lasers to aim at all the targets they passed, with Buzz Lightyear himself to urge them on with words of encouragement. At the end they were thanked profusely by the three-eyed little green creatures for saving their lives – glad to be of help guys. 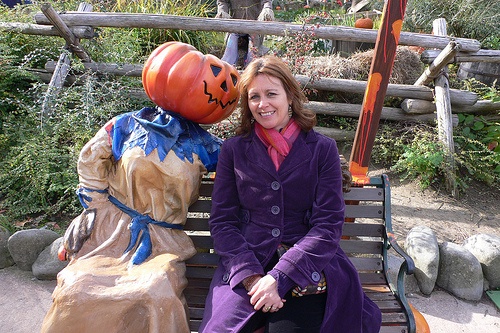 Halloween in Frontierland at Disneyland, Paris

Now the bear family crossed the Central Plaza and entered Adventureland through Alladin’s gate, where Mummy bear immediately felt at home surrounded by eastern promise as she’d always wanted to visit Marrakech. But before long the desert landscape changed as they turned left into Frontierland, where the Halloween theme was running riot with fantastical figures and displays made entirely from pumpkins. Slightly overcome with halloween fever, they quickly retraced their steps and feeling that it was time for another big ride headed for the Indiana Jones Temple of Peril where a huge ruined stone temple loomed out of the jungle. 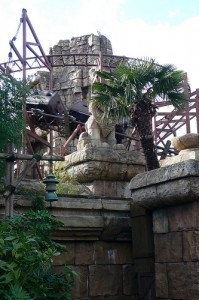 They queued through the bamboo forest where old canvas tents were filled with pith helmets, wicker hampers and dusty old artefacts packed in straw. Mummy bear had a soft spot for Harrison Ford and rather hoped that he would appear as Indiana Jones and whisk her away in the canvas topped old truck with the bullhorn on the bumper.

As they reached the front of the queue, Mummy bear realised that this was going to be another variation on the terrifying Space Mountain Rollercoaster. As they hurtled around far above the ground, she glimpsed through her half closed eye a vision of Angkor Wat, overgrown with creepers and bamboo and encircled by girders. She felt the rush to her head of upside down gravity as they looped the loop and registered the rush of down and the swoop of up and all of a sudden it was over again. This time Master bear had not enjoyed the roller coaster effect quite so much, and was wearing a look of fixed resignation on his face, so they decided that they’d probably had enough scary rides for one day.

They walked back to Fantasyland, stopping to have their photo taken with Balloo the bear, and ate fish and chips at Toad Hall, ye olde British pub with real old fashioned cobwebs at the window. 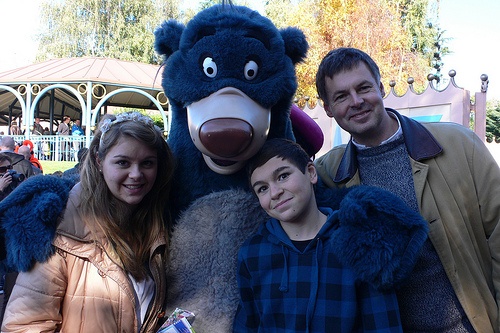 With Balloo the bear at Disneyland, Paris

They boarded the rather more genteel train that circled the Disneyland Park at the Fanstasyland station and did the full circuit surrounded by painted wooden panelling, stained glass and brass lanterns. There was a glimpse of the grand canyon full of stuffed animals as they passed Frontierland, and some lights of mysterious happenings deep in the mountain as they passed Adventureland. Mummy and Daddy bear were relieved that this was one ride that didn’t include 360 degree loops or gravity defying drops, although the teenage bears found it very tame. 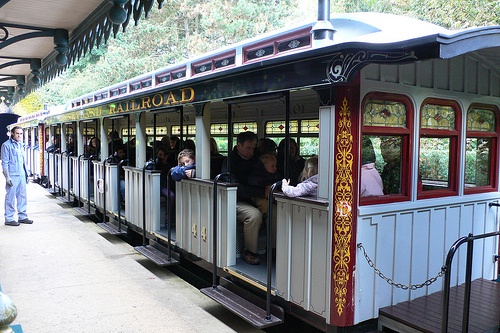 As they converged on the Central Plaza, a show was in full swing with Minnie Mouse cooking something up with Ratatouille the rat, but they pressed on back towards Main Street. The next hour passed in a blur as they wove in and out of the many shops tempting them to buy piles of stuffed Disney Characters, Minnie Mouse headbands, Snow white costumes and twirly straws. Mummy bear lost count of the number of times that she took out her credit card, for one essential purchase after another while Daddy bear got ever more grumpy and tired.

But luckily the nightmare shopping spell was broken by the start of the afternoon parade. They all perked up as the floats came round the Main Street plaza, with one set of Disney characters after another, waving and smiling as if their jaws would break. There were can-can dancers, pirate girls and life size green soldiers all performing their socks off for the appreciative audience. Mummy bear wished that those security men in blue satin bomber jackets would get out of the way of her photos but then her camera battery ran out anyway. 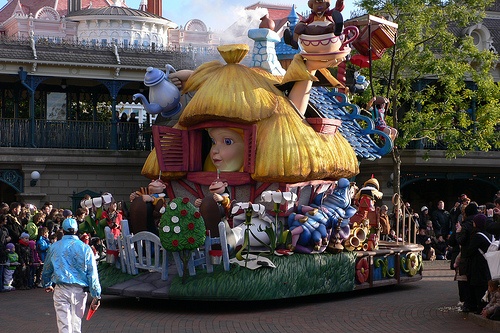 Once it was over, they all agreed that they’d had enough magic for one day and that it was time to wend their weary way back to their cottage (mobile home) in the authentic French village of Berny Riviere. What an intensely supercalifragilistic day it had been.

If you need some help getting across the channel to Disneyland Paris, be sure to check out Brittany Ferries.

Here’s wishing for many more magical days at the Disneyland Magical Kingdom!

Heather and her family visited Disneyland while staying with Eurocamp at La Croix du Vieux Pont at Berny Riviere, a holiday parc that is ideal for family breaks with plenty of sports and activities on site. The parc organises regular coach trips to Disney’s magical kingdom, so you can relax without taking the car.

What else did we do on this trip? 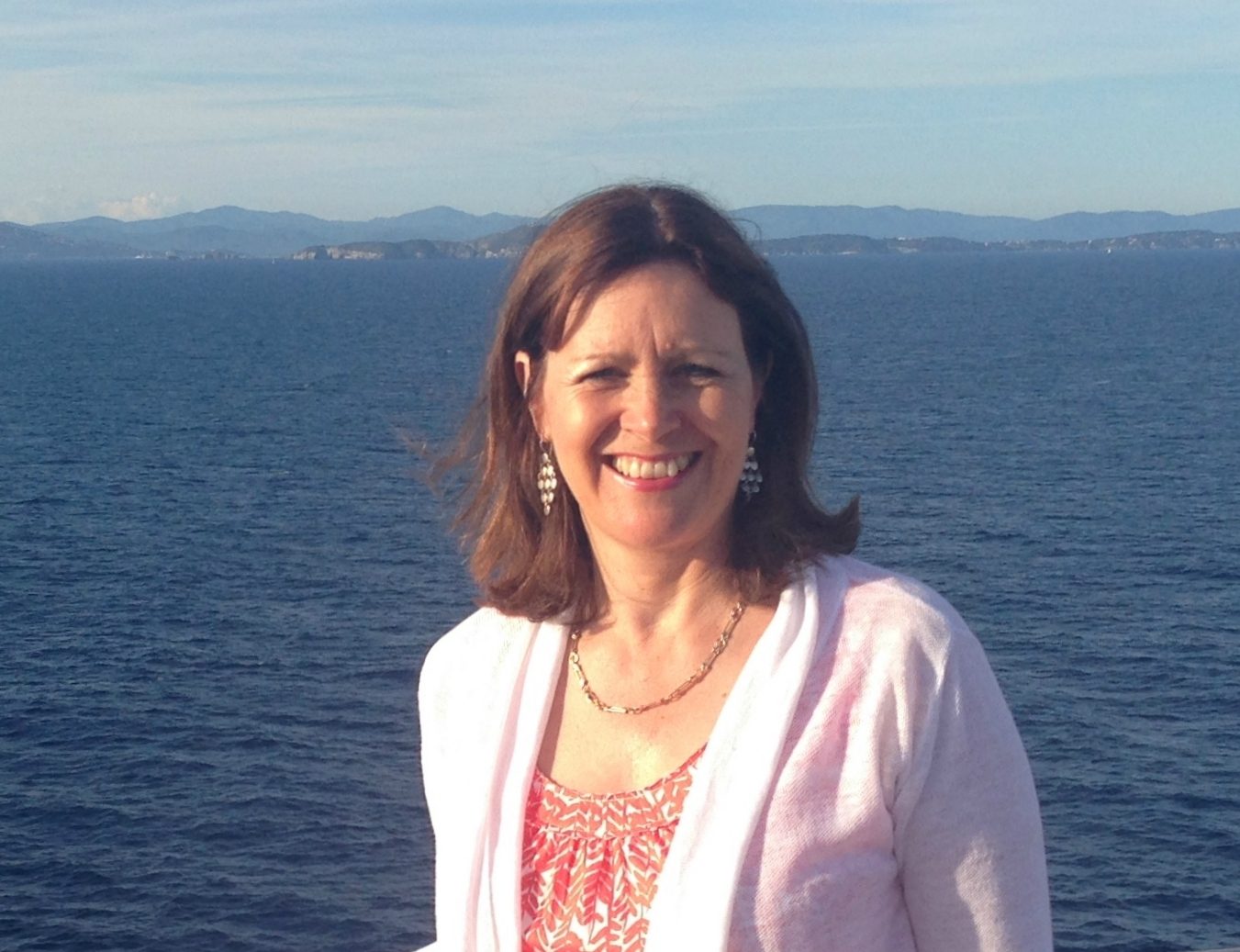