Fancy a dip at the Roman Baths at Bath? 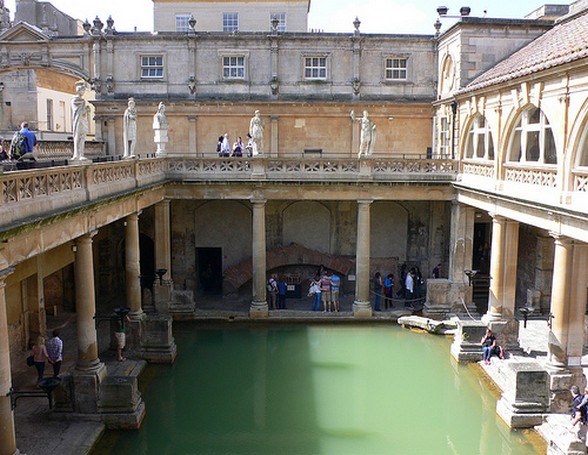 Although I live in Bristol, a city that has plenty of interest for the visitor, the smaller city of Bath attracts many more visitors, with elegant Georgian architecture and the major attraction of the Roman baths. As a local you seldom visit the tourist attractions on your own doorstep and sometimes wonder what the fuss is all about or think you’ll get round to it eventually. I guess that’s why I had never visited the Roman Baths although my children had been on school trips, but as we had a French guest to show around, it was the obvious place for a day out.

Great Bath at the Roman Baths in Bath

The baths are built over a natural hot spring that existed well before Roman times, but was enclosed in the 2nd century AD to become the focal point for worship at the temple of the Goddess of healing Sulis Minerva. The Roman Baths that grew up were unusual for their size and for the amount of hot water that was freely available – most baths around the Roman Empire used smaller plunge pools and a limited amount of hot water, as heating water was expensive.

The baths were a cross between a public leisure centre and a site of devotion to the Goddess Sulis Minerva, with a temple courtyard and altar next to the spring. The Roman Baths in the centre of the city are now surrounded by the cathedral and shops but originally they stretched over a much larger area and some of the remains are under the level of the surrounding streets.

You may also enjoy: Visiting the Christmas Market in Bath 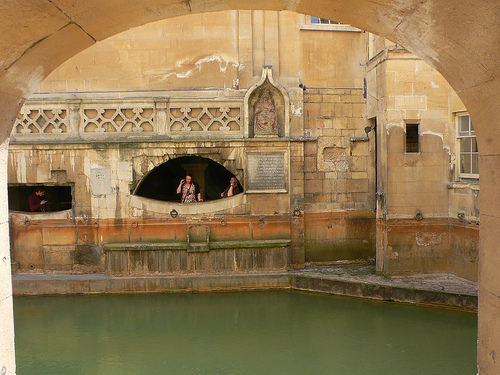 Kings Bath at the Roman Baths in Bath

In the 18th century the Grand Pump room was built next to the main spring as a place where people could socialise and taste the health-giving spring water with these fashionable visits to Bath mentioned frequently in the novels of Jane Austin. In the 19th century the wider extent of the Roman Baths were uncovered, the columns and statues of the Great Bath reconstructed and the baths reopened to the public in 1897. 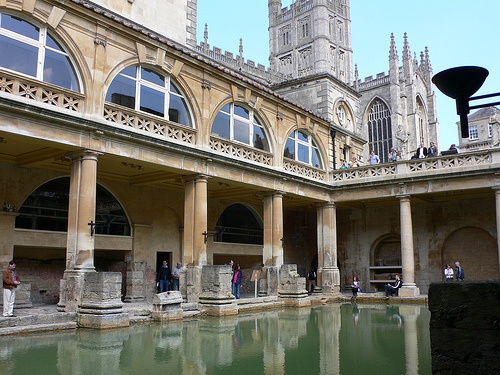 Great Bath at the Roman Baths in Bath

As you enter the bath complex you are given an audioguide that can play in several languages and can be stopped and started at each point on the tour which worked well and allowed everything to go at their own pace. At certain points there is commentary designed for children and also reflections by travel writer Bill Bryson on his experience of the baths.

The starting point for the tour of the Baths is the terrace above the Great baths, which was created in 1897 when the baths were re-opened with imposing statues of Roman Emperors who had connections with England. Moving around, you can get a view of the other different baths in the complex, including the smaller original King’s Bath which was a mysterious, sacred place containing the original spring water, steaming and gently bubbling like the whisper of the goddess. Into this pool, prayers or curses, written on small lead tablets were often thrown to ask for the goddess’s help. You can hear the voice of the angry plaintiffs across the century requesting punishment for the person who had stolen their cloak or other possessions.

The remnants of the carved stone pediment of the temple have been constructed with a central Gorgon’s head looking more ancient Briton than Roman. Later in the tour you reach the Roman level of the baths, walk around the original temple courtyard and can see the original Roman brick overflow for the spring which channelled the water away to discharge in the nearby River Avon. The scene at the temple and baths in Roman times is brought to life by short film clips of people going about their business – the bored Roman matron and her young servant girl, the young family walking by, the temple priests, full of their own importance remind us of the real people who walked upon these stones.

The Pump Room in Bath

The tour ends at the lower level of the great bath where visitors can sit by the water getting a sense of what it was like to come here to relax, bathe and socialise. It really feels like an open air swimming pool that you’d love to jump into and cool off. As a final part of your visit it’s worth walking through the pump rooms, where you can also have afternoon tea, and you can taste the mineral water from the spring served from an elegant Georgian urn. It doesn’t taste particularly pleasant, but then it it did it wouldn’t have such a reputation for health giving properties would it?

Do you have any major attractions like this near you that you never got around to visiting?

More things to enjoy in Bath

Hopefully less of the April showers and more of th