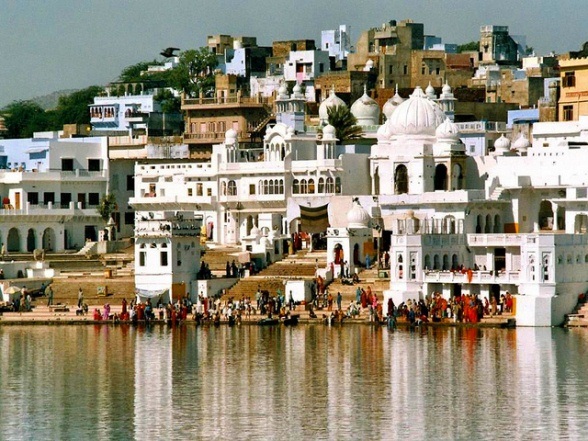 In this article, our guest writer Rohit Agarwal explores some of the bizarre Hindu temples to be found in India, where rats are made welcome, Chinese food is offered and a motorbike is on show.

India is land of different cultures, accumulated through its history and characterized by their distinctive customs. Many of these customs can come across as bizarre to the people who are not native to these rituals. Hinduism is the most widespread of all the religions in India and it is a home to some of the most magnificent of the temples or shrines found anywhere in the world. But being a land of strange customs many temples in India are enshrined with mysticism and are often associated with a lot of bizarre myths, legends and customs. Here are some of the most bizarre temples in India; 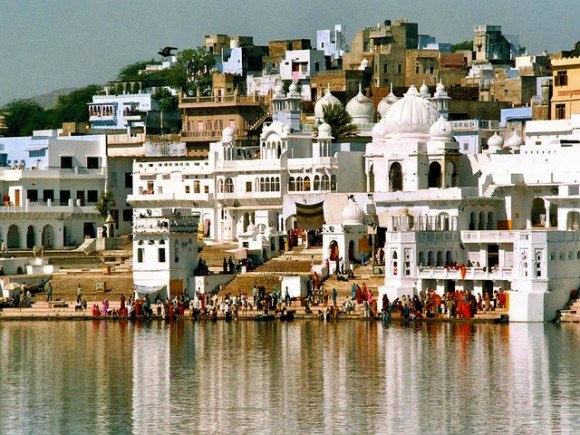 Considered to be the only Brahma temple in the world by many, this temple however, is the most famous of the few Brahma Temples that really exist in other parts of the country. It is situated in the holy town of Pushkar in the State of Rajasthan. Pushkar contains over 500 temples most of which were destroyed under the reign of the Mughal Ruler Aurangzeb. The Brahma temple structure as we see today dates back to the 14th century but the temple site is said to be over 2000 years old. The town of Pushkar is said to have been created by the falling petals from the Lotus held by Lord Brahma and due to his wife Savitri’s curse, he was only worshipped in this place. However the effects of the curse were nullified by Gayatri (a Gurjar girl who Brahma married and was endowed with the powers of the Yajna or fire sacrifice performed by Lord Brahma). This temple boasts of its marvellous architecture and is built with stone and marble slabs. 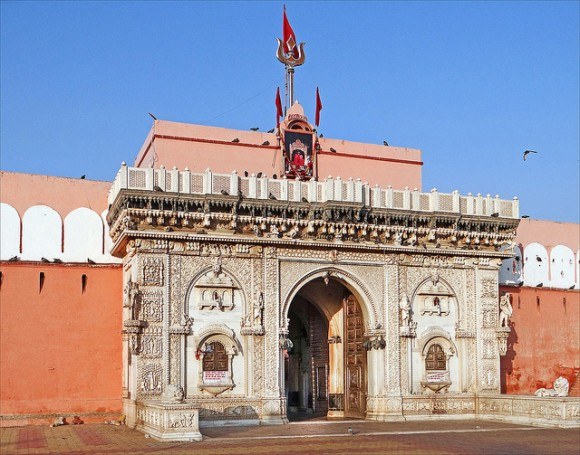 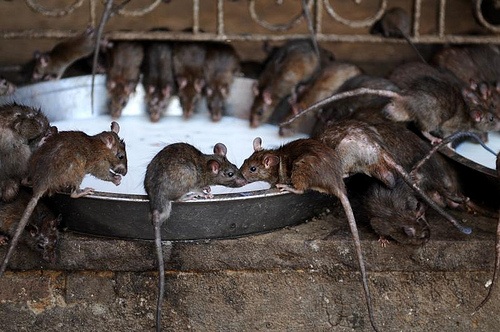 Deshnoke is a small town located near Bikaner in the State of Rajasthan. While it is a rural town, Deshnoke is famous for its prime attraction, The Karni Mata Temple. This temple is dedicated to Karni Mata the incarnation of Goddess Durga and is the ancestral deity of the royal families of Jodhpur and Bikaner. The temple is known for its distinctively bizarre population of approximately 20,000 black rats. The rats are said to be the children of Karni Mata who drowned in a lake while drinking from it and upon Karni Mata’s implorations were allowed to be reborn as rats by Lord Yama, the Hindu deity of Death. Various versions of this story exist however, including the one where the rats are considered to be the 20,000 soldiers who deserted a battle and upon realizing the sin they have committed, took shelter in the temple and were turned to rats by Karni Mata and vowed to serve her for atonement. The visitors are not bothered by the rats and usually offer sweets and milk as an offering. The sight of any white rat is also considered a very auspicious moment. This is one bizarre temple indeed. 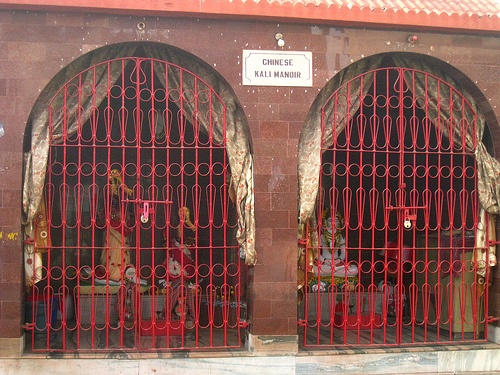 This temple is located in a small town called Tangra near Kolkata in the State of West Bengal. Tangra serves as the Chinatown and is populated by the Chinese inhabitants in India. The temple is dedicated to the Hindu Goddess Kali that is surprisingly worshipped by the Chinese inhabitants. Although, the Temple’s architecture is not that special or noteworthy, the surprise lies in the offerings that are made. The Chinese people that live here offer rice, noodles, chop suey and other vegetable dishes. This aspect alone makes the temple famous in the country as many people visit the temple to worship the Goddess and receive noodles, chop suey and the other Chinese cooked vegetables as the ‘Prasad’. Another great aspect of this temple is that the Chinese who live in this area are Christians or Buddhists but they still worship the Goddess Kali devotedly. This place totally exemplifies the cultural bond between India and China. 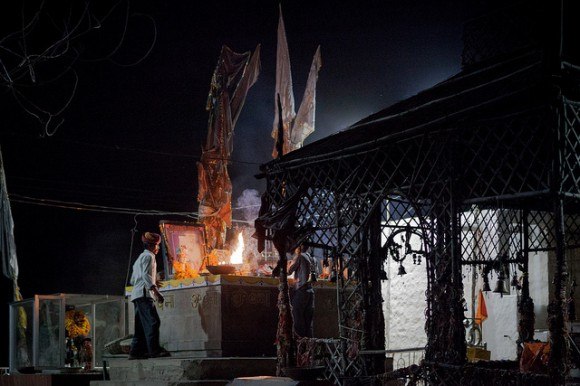 Yet another strange temple located in Rajasthan, ‘The Om Banna Temple’ or the ‘Bullet Baba’ shrine is located in Pali district near Jodhpur. The temple is characterized by a strange deity that is represented in the form of a 350 CC Royal Enfield Motorcycle or ‘Bullet Baba’ that is worshipped by people for a safe journey especially when bearing liquor. The legend of the temple goes back to 1988, when a rider named Om Singh Rathore was travelling from Pali to Chotila and met with an accident that resulted in him falling into a ditch where he died. The Motorcycle was recovered by the Police who kept it in the nearby police station. However, the next morning the motorcycle was miraculously found at the accident spot again and even though the police tried defueling and locking or chaining the vehicle, it would be found again near the accident spot. This was seen as a miracle and the motorcycle was placed in a shrine built near the accident spot which serves as a temple and a memorial for Om Banna. The place is revered by hundreds of riders and travellers who visit the place to pray to the Motorcycle Deity for a safe journey. 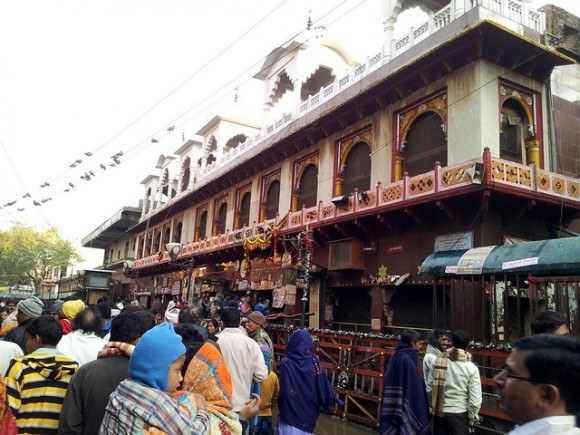 The Temple is dedicated to the Hindu deity, Lord Hanuman and is located in the Dausa district near the ”Pink City” – Jaipur in the State of Rajasthan. The deity, Lord Hanuman is usually worshipped by the Hindus as the Monkey God is said to quell the powers of evil and exorcise the influence of any evil spirit. Owing to this, the Mehandipur Balaji Temple is nicknamed the ‘Witch Temple’ of India. The place can be one of the most thrilling and spine chilling experiences you would come across in India. The temple is frequented by hundreds of people who seek the head priest of the temple to get their painful experiences nullified which are said to be caused by the influence of evil spirits. One can witness various people who have been prescribed therapies like being shackled in chains or placing heavy stones on various parts of the body to ease the pain. Many people who visit the place for the first time might find these customs as strange, inhumane or anachronistic but there are many who claim to have been cured by these bizarre therapies.

On a trip to India, one might often encounter such strange and bizarre customs and traditions. Many tourists often find such rituals as revolting and outrageous but in order to derive the true cultural depth, experiencing these is a must. The temples mentioned not only define the strong sense of religion that the country possesses but also how religion in general influences the people in this mystical and magical country.

Author Bio:
Rohit Agarwal is an Architect by profession and a travel blogger. Having travelled to various places in the country and the world is often intrigued by the various cultures and traditions in different parts of India and the world. Rohit is a blogger at Trans India Travels that provides an insight on the various attractions in India.