Things to do in Lloret de Mar – sun, sea and so much more… 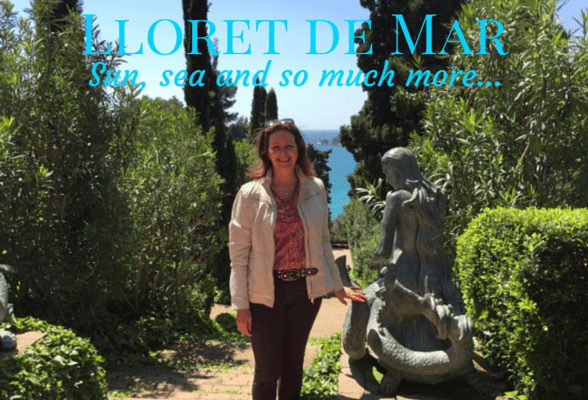 Lloret de Mar on the Spanish Costa Brava is a holiday resort that holds a certain memory for many UK travellers. “That’s where I went for my first holiday abroad!” exclaimed my mother, now in her 70s, who visited on a coach tour in the early 1960s when she was a young nurse and Lloret was a pretty fishing village. In more recent years Lloret has gained a reputation as the place for a cheap holiday in the sun and while my son and his girlfriend had both been there on sports tours, neither of them seemed to spend any time playing sport! It seemed that everyone knew of Lloret de Mar, but perhaps for all the wrong reasons. 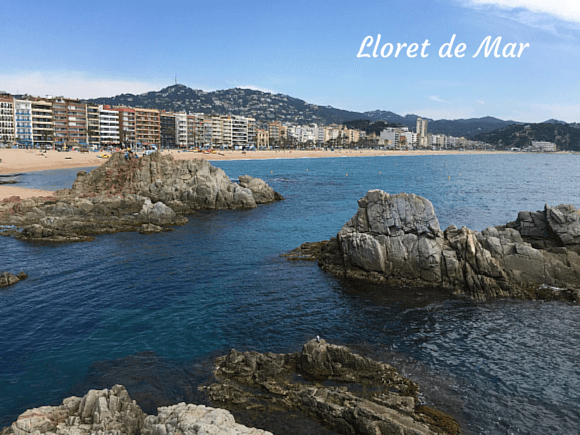 Towns like Lloret de Mar and Tossa de Mar expanded quickly in the tourist boom of the 1960s when many of the elegant mansions that lined the sea front were demolished to make way for multi-storey apartment blocks. This was a town that in the 19th century prospered from the wealth of those who left to seek their fortune in Cuba and returned as Los Americanos – the ones who had made it big in the Americas. 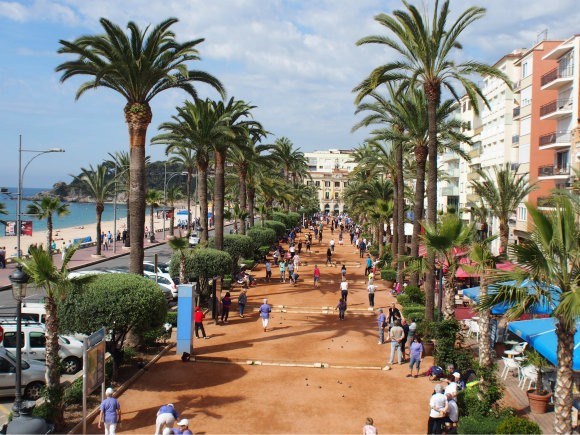 Curious to discover more about the old Lloret de Mar, I visited the Museu del Mar on the seafront, one of the few remaining& old houses on the seafront that was built by one such Americanos who had made his fortune in Cuba, which now tells the story of Lloret de Mar. The rooms of the museum were beautifully decorated with painted panels in green, red and yellow and coloured floor tiles from Valencia laid in intricate patterns. 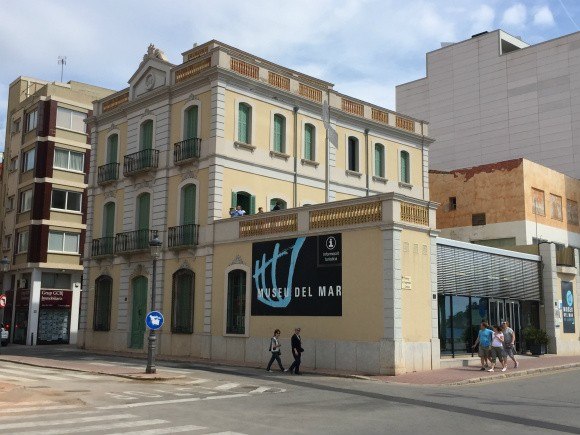 Our guide Joaquim showed us around the museum and explained how the ‘Cabotage’ trade up and down the Spanish coast had expanded after 1778 when direct trade across the Atlantic was allowed from Lloret de Mar. The beaches that are now enjoyed by sunbathers and families were used at that time as shipyards to build the ships that would cross the Atlantic to bring back rum, sugar, coffee and tobacco. 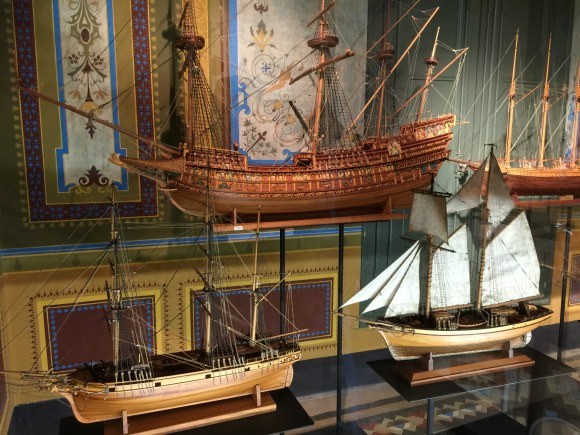 In the 19th century many people from Lloret emigrated to the Spanish colony of Cuba, often at the age of only 13 or 14, to join relatives who would give them their first job. They set up small bodegas or import export businesses and those that made their fortune would return to Lloret de Mar to build fine houses in the town and marry local girls. The term Americano or Indiano was given to a rich man who had made his money abroad, but if any returned without making money it was joked that they had ‘lost their suitcase in the straits of Gibraltar’. 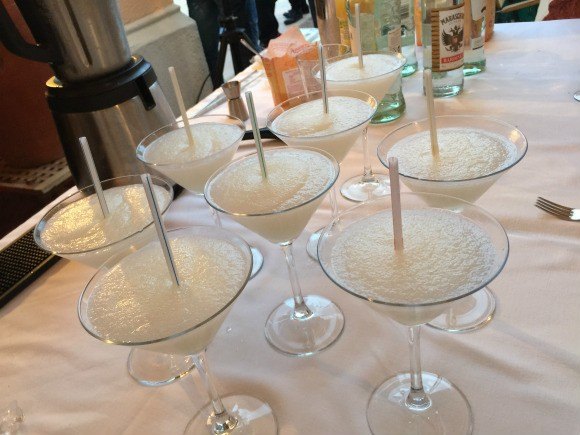 The Daiquiri Cocktail – the drink of Lloret de Mar

Another tradition that originates with the Cuban connection is the Daiquiri cocktail which is now considered the cocktail of Lloret de Mar. The drink was invented by Constanti Ribalaigua who emigrated to Cuba from Lloret in 1914 and opened the Floredita bar in Havana. The bar became the fashionable place to drink, with the stars of the day such as Gary Cooper, Ava Gardner and Ernest Hemingway coming to drink their daiquiri. When you’re in Lloret you can pick up a tapas and daquiri guide to all the bars in town where the cocktail is served or view it online here and I enjoyed my daiquiri cocktail at a special demonstration by Lloret’s most famous cocktail maker, Manuel Casademont of Bar Hula Hula. 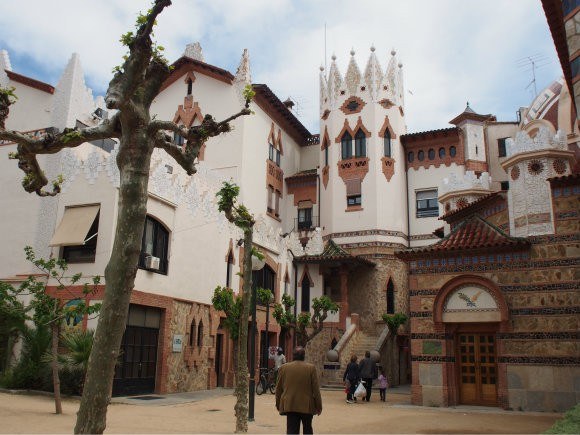 Around the historic centre of Lloret de Mar

My exploration of the old Lloret de Mar continued as I wandered along the sandy promenade of Passeig Jacint Verdaguer that was being used for a petanque tournament, reaching the neo-classical town hall. In the square set behind the promenade was the 16th century parish church of Sant Roma, its fortress-like stone tower in contrast to the colourful modernist style of the side chapel beside it, built in 1916 with decorative turrets and domes. 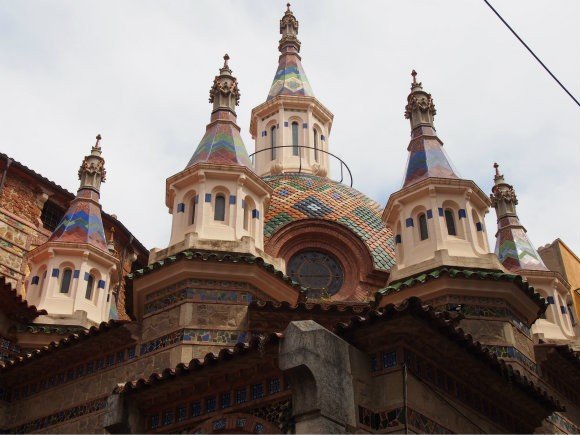 Continuing my walk along the promenade I climbed up to Dona Marinera or Seafarer’s wife sculpture, which represents all those women who looked out to sea for their menfolk, the fishermen or those who had gone overseas to make their fortune. If you are at one of the summer festivals in Costa Brava you may catch a performance of the Havaneros, the mechancolic songs named after the capital of Cuba and sung by those who were missing their loved ones across the ocean. 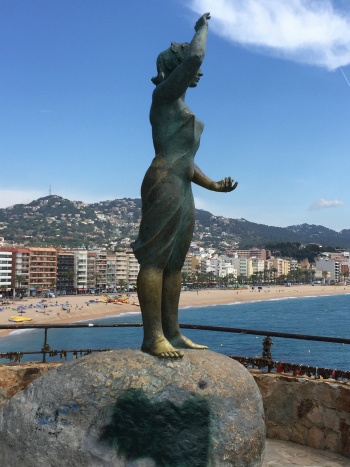 From this viewpoint I could look across the bay towards the small d’en Plaja castle built in 1935 as a neo-gothic folly and now one of the most photographed landmarks of the town. Turning away from the apartment blocks of the main beach I skirted the headland to discover a rocky coastline with turquoise water, much more the ‘wild’ Costa Brava coastline I’d been hoping for. 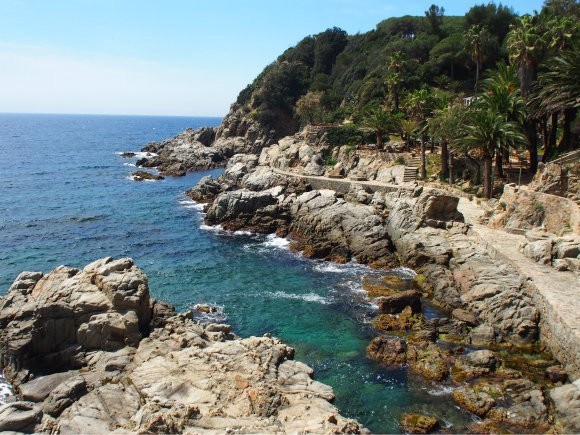 I had planned to continue along some cliff path but here the path ran out, so I used the map on my phone to guide me for a 20 minute walk through residential areas, until I reached the gardens of Santa Clotilde. This was truly a different side of Lloret de Mar, a tranquil green haven with terraces and sea vistas, interspersed with statues, pools and fountains. The gardens were commissioned in 1919 by the Marquis de Roviralta, named after his wife Clotilde, and his family still use the house overlooking the sea as a holiday home although the gardens are now maintained by the town council. 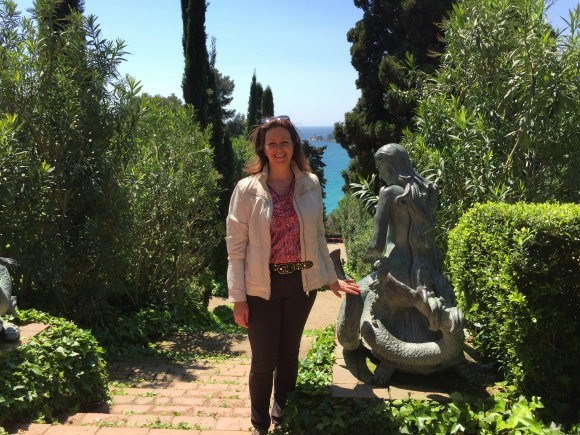 The garden was made in the Italian renaissance style with formal hedges and shrubs, punctuated by the tall columns of cyprus reaching for the sky. All the steps were fringed with ivy and beautiful sculptures graced the steps and terraces, with bronze mermaid statues created by sculptress Maria Ilimona Benet. From the top of the garden we walked through the pergola dripping with wisteria and down the pathways until we were overlooking the beach below, which can be accessed from a path near the entrance to the garden. 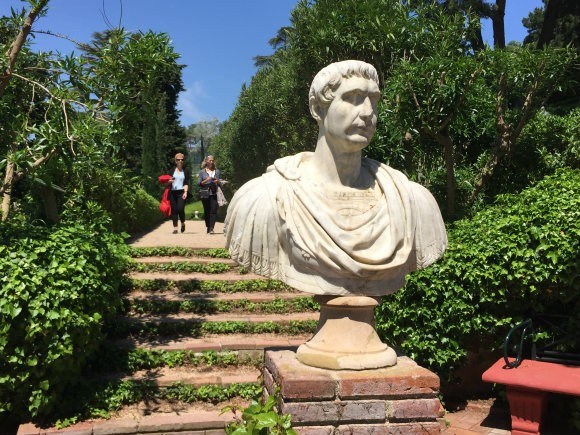 I noticed that there are other gardens in the area such as the Pinya de Rosa Botanical Gardens and the Marimurta botanical gardens which can be reached on a garden route of bus, tourist train and the boat that runs between Blanes and Lloret de Mar. Take the bus from outside the Lloret town hall and buy a combination ticket that covers both the transport and the garden entrance. The Lloret card which you can buy in town also allows free entrance to the Santa Clotilde Gardens as well as several other museums including the Museu del Mar. 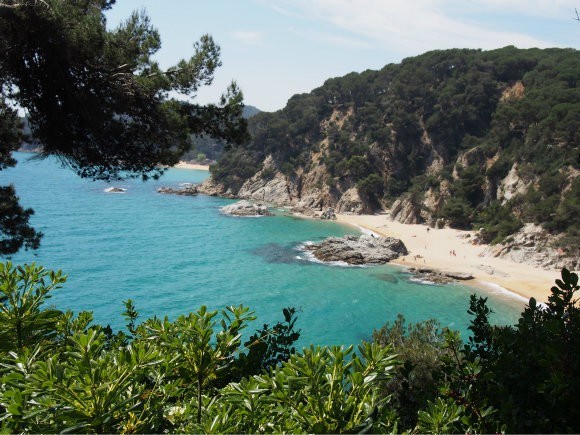 On my walk through Lloret I felt I’d discovered a different side to the town, the connections with Cuba that have shaped the town and the beautiful wild coastline. Personally I’d avoid the bright lights of the nightclubs and take the time to explore beyond the obvious, and of course drink a daiquiri or two to remember the ‘Americanos’ who brought their fortunes back to Lloret.

Where to stay in Lloret de Mar

While in Loret de Mar I stayed at the Evenia Olympic Palace Hotel where the TBEX travel blogger’s conference was being held. The hotel is part of a large resort complex comprising 4 hotel buildings with large pool areas and had excellent conference facilities. Although I typically prefer smaller boutique hotels, I was pleasantly surprised by my spacious and well furnished room with a modern bathroom and seating area. 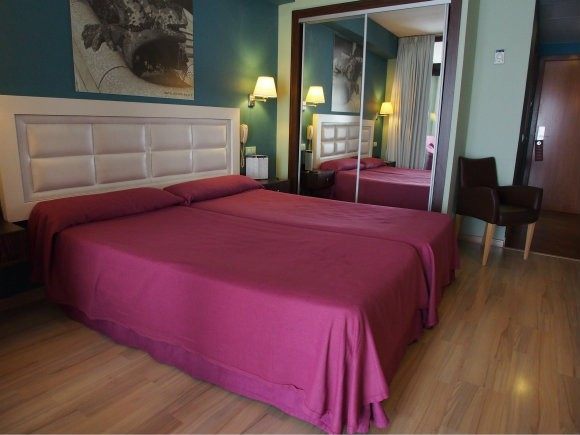 The hotel is set in a residential area, around 20 minutes walk from the seafront and the food we ate as part of the conference was excellent. The other guests were mainly French families, and I would recommend this hotel for families looking for a good value sunshine break in Lloret de Mar. The rate for rooms in May and June starts from around £60 per night. 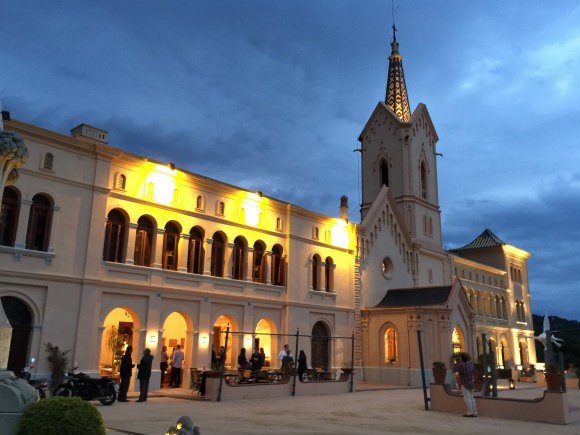 I also visited the gorgeous Hotel Sant Pere del Bosc which is set in the hills above Lloret de Mar for drinks and dinner as part of the conference, although I did not stay there. The hotel was originally a monastery but was bought in the early 1900s by Nicolau Font, a wealthy local businessman who had made his fortune in Cuba. When he returned to settle in Lloret de Mar, he added the chapel, tower and the house which was opened as a restaurant and boutique hotel in 2000. 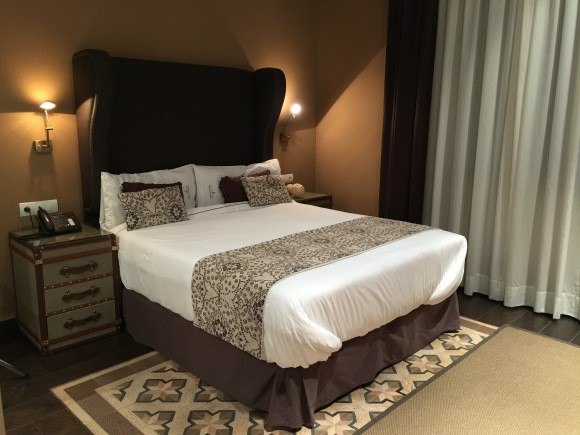 We were treated to the amazing specialities of the hotel including smoky grilled mussels and creamy potato soup topped with smoked caviar, which were created on a special ‘gastro-grill’ that we were shown in the hotel kitchens. Each of the individually designed hotel rooms is themed after a notable woman and I especially liked the Diane Fossey room which had antique leather furnishings with an ‘out of Africa feel’ together with an amazing sink shaped from a piece of polished wood. The hotel is set above the town in an area of protected woodland so you’ll either need a car to get up the gravel road or take a taxi and then stay put for a few days enjoying the peace and natural beauty. This is just the kind of hotel I’d love to relax with my husband for a romantic getaway.

Visitor Information for Lloret de Mar and the region