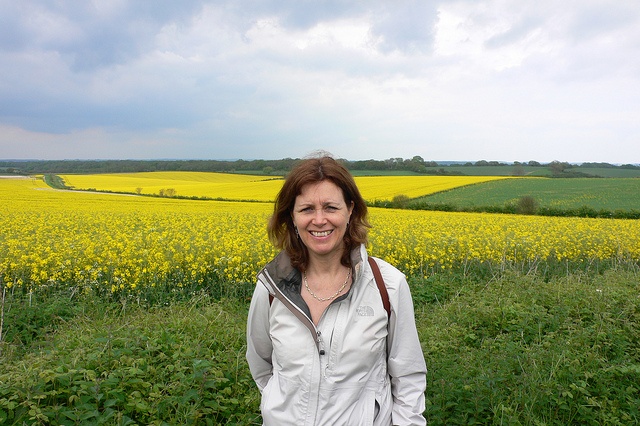 White chalk cliffs at one end and leafy lanes at the other was what I’d heard about the South Downs Way that meanders through Southern England, from the seaside at Eastbourne to the historic market town of Winchester. My sister, who was joining me for our weekend in Winchester had walked much of the long-distance path starting at the eastern end, but hadn’t completed the stretch near Winchester. 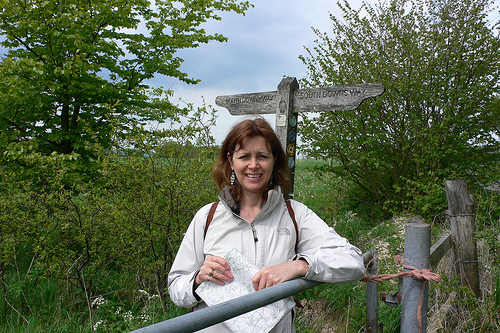 The start of the South Downs Way in Winchester

We decided to take a break from the sightseeing to stretch our legs a bit and breathe the country air. We could have walked out from Winchester, starting at the Winchester City Mill owned by the National Trust and then taken the bus back that runs from Petersfield to Winchester. However with time short we took the cheat’s option and parked a car at each end to make a comfortable three and a half hour walk that cut out some of the less interesting scenery on the outskirts of Winchester.

Chilcomb to Beacon Hill on the South Downs Way

We left one car in the village of Chilcomb and drove on to the car park at Beacon Hill, then realised that we’d have to do the walk backwards, not that it mattered too much. The short drive gave us a chance to admire the sheets of yellow rapeseed that flowers in May creating blocks of vibrant colour – the sort of scene that would catch any artist’s eye, with white lacy cow-parsley fringing the roadside verges. 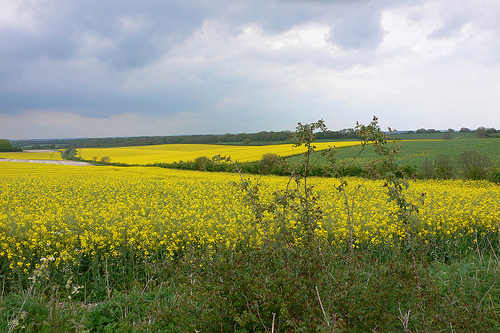 At Beacon Hill we left the car in the small muddy car park that we’d spotted of the map where a van-load of mountain-bikers were just unloading and trying out a few jumps around the trees – the South Downs Way is also very popular with cyclists and horse-riders.

Thinking that a hill with a Beacon might be a high point with a good view we backtracked a little way to the trig point which was not as high as we’d thought, so no breathtaking views but pleasant rolling countryside stretching out before us. We chatted to a couple by the trig point who’d just walked the route that we were about to set off on and were now taking a well-deserved break sitting on the grass. 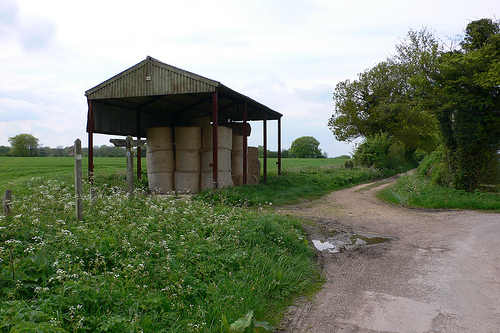 Although we crossed the odd bit of minor road, the track was mainly through shady woodland, green lanes between the fields and the high open country over Gander Down that is typical of much of the chalk upland that marks the South Downs Way. The yellow fields of rapeseed were there to be admired for most of the route and every so often we passed a feature such as an open barn, an old cottage or a few grassy mounds in the field that signified one of the ‘lost villages’ mentioned in the Domesday book that were abandoned in the Middle Ages.

Birds chirped away all around us, a hare darted across the far side of the field of cows and a startled pheasant scuttled away when I decided to get closer to the yellow field of rapeseed for a photo. We had the walk pretty much to ourselves except for a a few walkers coming the other way and a cheerful lone mountain-biker who apologised for answering a call on his mobile phone just as he passed us – obviously feeling that it was not quite the done thing!

A lunch stop on the South Downs Way

We found a fallen tree trunk to sit and eat the lunch that we’d bought from the farmer’s market in the Cathedral Close at Winchester, an odd mixture of a cold chicken and mushroom pie and a lardy cake oozing with sugar and raisins – we hoped that our walk would stop us becoming too lardy ourselves.

The only pub we passed was The Mibury’s in Alresford where a group of motor biker’s had set up a campsite in the adjoining field, but it was a bit to early in the walk to justify a refreshment stop. Instead we waited until the end of the walk at Cheriton, by which time it was nearly 7 o’clock and drove on to a pub that my sister had visited with her husband who loves a pint of real ale. 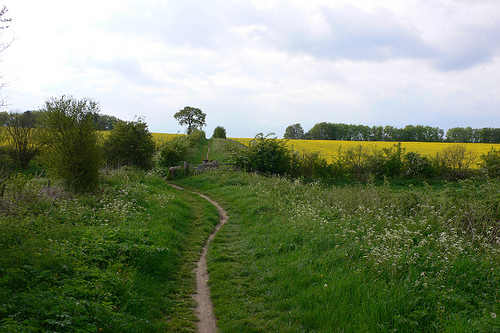 The Flower Pot Inn at Cheriton for dinner

The Flower-pot Inn at Cheriton was just what you’d like to find after a long, thirsty walk – an honest country pub with a brewery attached and dusty hops around the ceiling. There were benches in the orchard for supping a pint of a balmy summer evening (which it was not) which would be the only option for families as there were signs on every door reminding you that under 14’s were not allowed in the bar.

Is this the kind of place that 20 years ago Dad would have left the kids outside with a coke and a packet of crisps while he enjoyed a quiet pint? The Flower-put Inn is really all about the beer with no gastro pub pretensions although we enjoyed our lamb and apricot hot pot with jacket potato on the side and as I was driving I pushed the boat out with half a shandy. 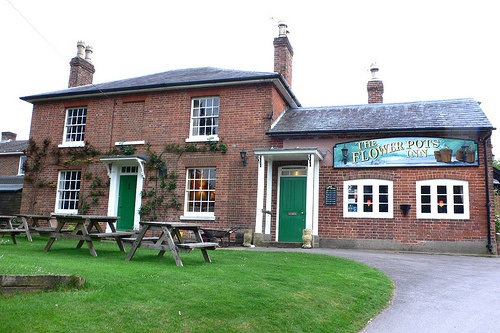 The Flowerpot Inn at Cheriton

Where to stay in Winchester

Warmed with the afternoon’s walking, not to mention the beer we returned by nightfall to our room at The Winchester Hotel for a well-earned hot bath with the cobwebs blown away from our walk on the South Downs Way.

The South Downs Way runs from Winchester in the West to Eastbourne in the East and more information can be found on the National Trails Website including details of accommodation along the route. 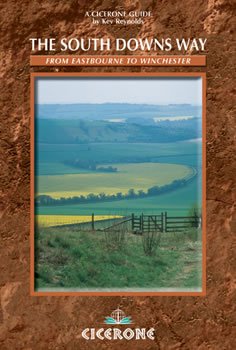 We used and highly recommend the Cicerone Guide for the South Downs Way with detailed descriptions of the route in both directions with maps and photos. Cicerone publish over 300 walking and hiking guides on routes in Europe and all over the world.

We stayed in Winchester at The Winchester Hotel, a modern and stylishly decorated hotel and spa within walking distance of the town centre.

For more information on things to do in Winchester and the surrounding area you will find the following websites useful;

Thanks to Visit England, Visit Winchester and Visit South East England who supported our visit to Winchester.