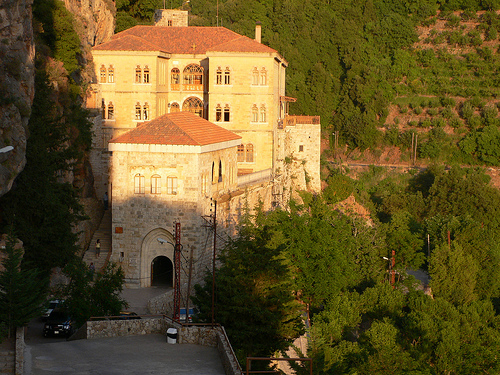 Staying at St Anthony’s Monastery on the beautiful Qadisha valley in Lebanon was one of the highlights of my trip. At 6.30 in the morning, the bells of St Anthony’s monastery woke me and I jumped out of bed, dressed and climbed the steps to the church which is built into the side of the rock face. Three nuns and a few monks were already there, praying and chanting.

Gradually a few more monks in their black habits filtered in – I need not have hurried – I wasn’t the last. Perhaps the most incongruous thing was to hear the Catholic Mass chanted in Arabic and the monks took it in turn to say the prayers and readings.

As everyone emerged as the mass ended, a few workmen were gathering outside, politely waiting before they climbed the scaffolding to start their repairs to the church. Then the silence was broken as the drilling began and the tractor motor broke the peace as it drove down the path to the valley filled with fruit tree terraces and the river rushing at the valley bottom.

We had arrived the evening before as dusk was falling, and although there was a cafe below the guest house accommodation, it was mainly serving sandwiches and snacks, so we drove into Ehden for dinner in an Italian cafe. There seemed to be every variation on world food around the square there, with free Wifi everywhere and I concluded that it must be a popular place for backpackers.

Back to the Monastery and I slept soundly in my room in the guest accommodation, which was separate from the Monastery and had only been completed in the last year or two. The rooms were all en suite and simply furnished, with a view across to the other side of the valley.

We remarked how beautifully everything about the guest house had been finished, from the stonework, to the carved wooden doors, to the traditional coloured glass lanterns, and later found out that it had been designed by an ecclesiastical architect who had applied the same high standards that would be applied to any work on a church.

The guest house was run on professional lines, with lay staff at the reception area, and I believe that it was open to all, as long as you booked in advance and respected the religious ethos of the monastery. Most of the visitors, I imagine would be pilgrims and church groups, or perhaps groups hiking in the Kadisha Valley.

The monastery’s history goes back to the 12th Century, when hermits came to the valley seeking a reclusive life in the caves or small cells chiselled out of the rocks. in the 17th century the Lebanese Maronite Order was founded and the monastery of St Anthony constructed on the rocky side of the valley.

The monastery was renowned for its prosperity and endowments, and also as a shelter for pilgrims and travellers – well wishers would say “May God make Qozhaya prosperous” Today, most visitors come as part of a visit to the beautiful Kadisha Valley, a Unesco World Heritage site, where you can hike and visit other monasteries along the valley.

St Anthony’s is the largest of these and you can visit the church and the Grotto of St Anthony in a natural cave beside the church. The Grotto has a reputation for miracles, drawing many pilgrims who bring their intention, especially for those who are mentally ill. You can see the chains and manacles in the grotto by the altar, where the mentally ill were secured overnight in the hope of a cure.

Take that how you will – I think being chained up in a dark, damp cave might send me over the edge rather than cure me.! I noticed there were a lot of pots and pans in the grotto and asked the monk we met in my best French why they were there.

He explained to me that couples who were unable to have children would come here to pray for a child, and if their prayers were answered, they would leave a metal pan behind that signified the pregnant belly of the mother. At least that’s what I think I understood!

There is also a small museum and shop where you can buy books and religious artefacts. In the museum you can see the oldest printing press in the Middle East that was used to print religious texts in the 16th century. The printing press was still printing up to the beginning of the second world war.

After our night at the monastery, we were driving on, over the Mount Lebanon pass into the Bekaa Valley, but if I went back, I would definitely spend a day hiking in the Qadisha Valley to explore the rocky mountain scenery and the other monasteries along the valley.

It was also a wonderful experience to stay in St Anthony’s Monastery itself, and see the sun come up and creep in to warm the valley. If you also would like to stay in the guest accommodation, you should contact the monastery by e-mail or telephone in advance, to make your reservation. Otherwise, Ehden seems to be the main base for staying while you explore the Qadisha Valley.