The Fallas museum – in Valencia 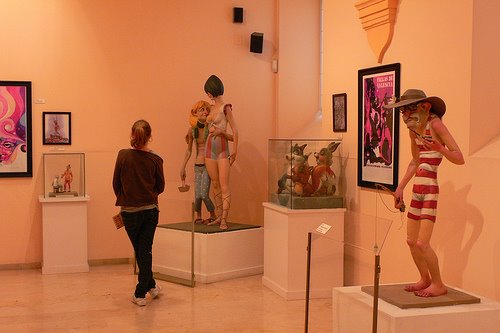 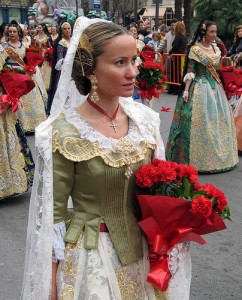 The Fallas festival must be one of the best known in Spain and it’s unique to Valencia. It happens every year around the feast of St Joseph on 19th March as it is said to have started when the carpenters of the city, whose patron is St Joseph, would clear out their workshops and burn their scraps of wood as part of their spring-cleaning.

From a community and religious perspective, local neighbourhoods form Fallas associations and contribute money throughout the year to commission huge sculptures made of wood and papier-mâché.

The female members of the association, called Falleras, dress in sumptuous costumes made of brocade and lace and parade through the streets, to bring floral tributes to a statue of the Virgin Mary in front of the Cathedral. Each association holds a street-party with their fallas sculpture on display and has a feast of paella, which they cook up on bonfires in the street.

What the visitors see are the parades of the enormous sculptures which are competing for prizes and the pyotechnic mania which grips the city, with the sculptures being burned and mascaletas or bangers being set off in the street as well as organised firework displays. The sculptures are like cartoons and are often a satire on political characters or situations and they all go up in flames at the end of the fiesta.

Unless you visit Valencia during the week of the Fallas festival, the closest you’ll get is a visit to the Museo Fallero, near the City of Arts and Sciences. Each year, one of the smaller figures or ninots is voted the best and is ‘pardoned’, saved from burning and sent to be displayed at the museum. The figures date from the 1930s through to the present day, and it’s interesting to see how the early figures are quite simple, while the more recent become more satirical or risqué.

It’s a great place to bring children who will enjoy the cartoon-like aspect of the figures while adults might appreciate the satire and sense of humour. Also on display are some of the stylised posters for the festival each year and the portraits of the Fallera Major or the Queen of the Falleras, who is appointed each year.

The festival is one non-stop party and if you’re in Valencia at that time, you won’t get any sleep for days and will probably go home deafened by the bangs. So you may find that it’s more peaceful to visit the museum and enjoy the figures in a calmer atmosphere.

There’s an interesting podcast to listen to about the festival and the community activities behind it on Notes from Spain website here, and also a video to watch.

You can see my photos from the museum on my Flickr site here. Thanks also to Not Forgotten and viajar24 for their photos on Flickr.