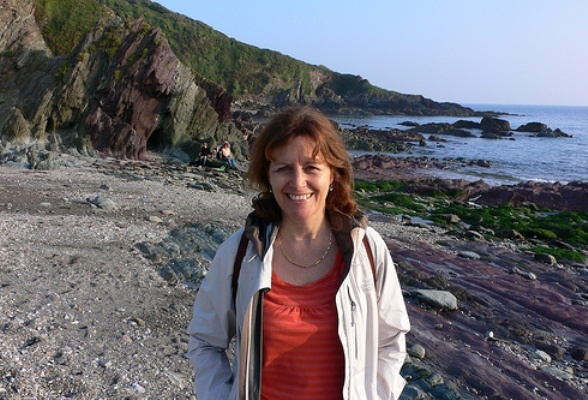 It was supposed to be a summer break, but my friend couldn’t make it and so we re-booked for October. In August I’d planned a lovely country house hotel; relaxing with a glass of wine on the terrace; walking the cliff paths; exploring the stately homes and gardens of Cornwall. In October it was all of those things, except perhaps the sitting on the terrace (far too autumnal for that!)

Our adventure started with the crunch of car wheels on the gravelled drive of the Horn of Plenty, tucked down one of those narrow Devon lanes, but with a magnificent view over the wooded valley. On the distant hillside was a tall stone chimney and we discovered that the house was built for the manager of the local copper and tin mine, on just the spot where he could keep an eye on his mine across the valley. Sadly the bare spot on the forested slope was where the washing of the minerals had polluted the ground and nothing would grow.

We were far too early to check in, so we set off for that country walk while the weather still promised sunshine (in England you have to seize the best of the weather, especially in Devon). Of course we could have gone hunting the Ash Black slug on Dartmoor, right on our doorstep, or walked from Tor to Tor, but I just fancied a bit of sea air.

Down to Looe we drove, taking the bridge across the river and up a narrow road that looked like a dead end, where the vista opened up to a long seaside promenade and we parked the car. My parents had walked this route before and told me we could follow the cliff path as far as Polperro and stop at a tea shop half way. I love cliff walks, and love tea shops that serve cream teas even more. 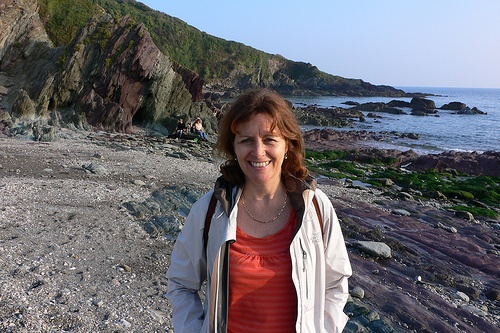 The weather was with us and we walked for an hour in brilliant sunshine, passing the little island  and skirting the headland until we reached Talland bay where the promised Talland Bay Beach Café awaited us. It’s open from spring to autumn and is popular throughout the summer season as people come to visit the sheltered beach at Talland Bay with plenty of rock-pools for dabbling and crabbing.

We could have walked on another hour to the picturesque village of Polperro, a tourist magnet in summer with narrow lanes that are best avoided in a car, but by the time we had sat in the autumn sunshine with a cup of tea and a teacake with clotted cream and jam, we thought it was best to retrace our steps and be back to the car by 5ish.

Driving back to the Horn of Plenty, we settled into our very nice room (the one we had to cancel in August) and then drove into Tavistock for dinner in the restaurant of Brown’s Hotel. We could have eaten at our hotel of course, which is known in the area as quite a gastronomic destination but as it was the £50 set menu or nothing, we decided to go in search of something more modestly priced. The Browns restaurant was lovely with food that was very prettily presented although smallish portions, but we got some free bread and olives thrown in as well as the water from their own well.

The next day we really enjoyed our cooked breakfast at the Horn of Plenty, with more of that fantastic view over the valley from our table in a glazed extension with picture windows that had been built over the original terrace. We decided to visit Antony, a National Trust property that was half an hour’s drive away, overlooking the estuary towards Plymouth.

It’s recent claim to fame is that the house and gardens were used as the setting for the Tim Burton film of Alice in Wonderland, with huge yew hedges, and some topiary shapes such as the cone with a door carved into it, from which the game of croquet taking place on the lawn could be watched.

There was an incongruous conical water sculpture that apparently was covered with yew clippings to make another topiary feature when the Alice in Wonderland was being filmed. I’d really like to see the film to try and recognise the different locations, although from the trailer it all seems a bit dark and Gothic, rather than the lighthearted children’s tale that we think of. 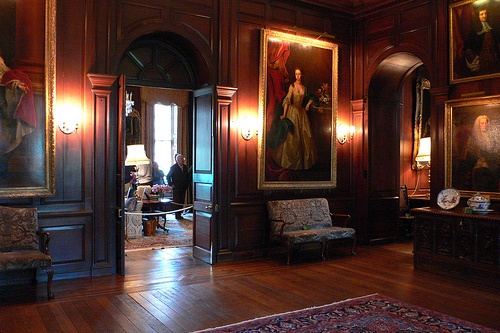 We got a timed ticket to the house which was unusual in that it is still lived in by the Carew Pole family whose ancestors built the house in 1724. Although the National Trust own the house, the family still own all the contents and it was fun to see all the coffee table books and family photographs, as well as the magnificent furniture and portraits.

I was really pleased to find that photography was allowed which is extremely unusual in National Trust properties where they usually look at you in horror as if you’d asked to take home one of the priceless family heirlooms. In the library we found the portrait of the ill fated Sir Alexander Carew next to the leather jerkin that he wore in the portrait – you can read the story of Sir Alexander’s leather jerkin and how he ended up on the wrong side in the English Civil War which cost him his life.

Upstairs, you could peep into all the bedrooms with antique furniture and portraits with the odd bit of clothing left on a chair indicating that many of these were also in daily use. It must be a mixed blessing for the Carey Pole family living here – at least they managed to retain the use of their ancestral home, where many others had to sell off these stately homes, but I bet you it’s a relief for them when the visitors have gone home and they can mess the place up again.

After our look around the house we circled the enormous walls of the kitchen garden and were struck by an unexplainable smell of toffee which turned out to be from the Cercidiphyllum japonicum tree in the arboretum – I saw the name on a notice but couldn’t work out which tree the smell was coming from. Our final stop was at the tea shop where we sat outside with our Earl Grey and scone with cream and jam (shared to preserve the waistline) and caught the last of the afternoon sunshine.

We drove back to the hotel and once again decided to eat out, this time hoping to find an atmospheric country pub on Dartmoor that had good food. Our first choice, the Dartmoor Inn at Lydford was all in darkness and so we managed to miss it on the main road, spending a while driving around the village itself . When we finally located it, it was shut except for residents – very annoying as we were getting hungry by this time.

On the road back we spotted a sign for the Elephant’s Nest and drove through the dark, narrow lanes for a great meal in quirky pub surroundings with only a few locals for company. We spent our second night at the lovely Horn of Plenty before we set off the next morning, back up the M5 for Bristol, feeling that we’d really blown the cobwebs away on our October weekend break.

Links to the places Mentioned

The Horn of Plenty – A Small luxury hotel with a gastronomic reputation. We shared a Deluxe Double in the main house which cost £175 per night and they also have ground floor rooms in the Garden block at the back of the hotel which you have to walk outside to get to.

The dinner menu is a fixed price £49.50 menu although on Monday there is a cheaper ‘Pot luck’ menu and in November they have an a la carte menu on offer. We sound this rather expensive with no flexibility, so we decided to eat elsewhere, but it would be lovely if you were there for a special celebration. You should be aware of their cancellation policy which requires 14 days notice if you wish to avoid any cancellation charges.

Talland Bay Beach Café – Right by the Talland Bay beach and coastal path with a large field for private parking as long as you are eating there, and a small shop selling everything you need at the beach from buckets and spades to body boards.

Brown’s Hotel in Tavistock – where we ate in the restaurant. The food was delicious and beautifully presented, although small portions and on the expensive side. They also have a more modestly priced brasserie menu which is served in the small lounge area and conservatory. Our meal cost around £35 per head.

Dartmoor Inn at Lydford – looked very nice but sadly was closed on the Sunday night we wanted to eat there.

Elephant’s Nest at Horndon – a country pub on Dartmoor with a large garden – we enjoyed our meal here with interesting food and a specials menu. Our meal cost around £25 per head

Antony – a National Trust property near Torpoint in Cornwall, with a beautiful 18th century mansion, and landscaped grounds and topiary gardens where the film Alice in Wonderland was filmed.

More things to enjoy in Devon and Cornwall