Religious art from before the earthquake at Zakynthos Museum – Greece 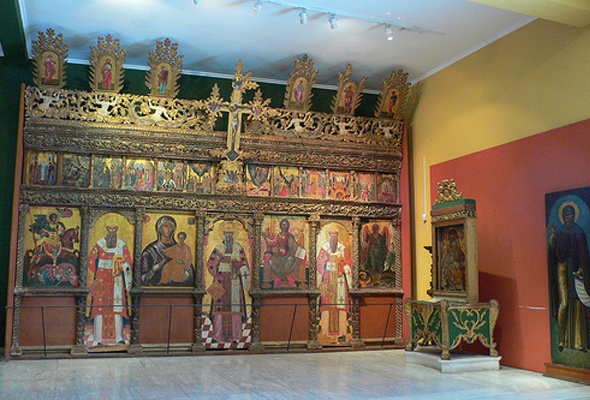 In 1953 a terrible earthquake struck the Greek island of Zakynthos and reduced the island capital, Zante town to rubble. Across the island churches were left in ruins and many of the important devotional artworks that were recovered were brought to be re-housed in the Zakynthos Museum on Solomos Square.

The square is named after the famous Zakynthian poet, Dionysios Solomos, who wrote the words of the Greek National Anthem and is situated at one end of the harbour. On three sides of the square are buildings, one of which is the long frontage of the Museum. It’s an anonymous looking place that could pass for a government office and I’d never been inside because I suppose I was too busy doing what most tourists do on Zakynthos; enjoying my favourite beaches and spotting turtles.

However, on my visit last year I had hired a car and driven with my husband to the northern end of the island to see the Monastery of St Dennis, the patron saint of the island. I suppose this spurred me on to take a look inside the Zakynthos Museum where there are a multitude of beautiful religious paintings.

The ‘Museum’ description could cover a multitude of different things, but here you’ll find two floors of religious art from the 17th and 18th centuries. There are entire altar screens from the front of a church as well as many panel paintings and icons of different saints, angels, Madonnas and other religious figures, all in glowing colours and gold backgrounds. It was like walking into a room full of life sized religious Christmas cards, the type that I send to members of my family who prefer to celebrate Christmas as the birth of Christ and not a commercial fiesta of robbins, reindeer and rosy cheeked Santa Claus.

There was also a beautiful room of 17th Century fresco that had been recovered from the Saint Andrea’s Monastery in Volimes on the north of the island that was brought to the museum after the earthquake. Throughout the museum there were many photographs of the devastation of the 1953 earthquake and how things looked before and after the earthquake.

I know from visiting the Romas Mansion on the other side of Solomos square that the town was rebuilt on the rubble and so the level of the new town that emerged as about 1 metre higher, and that the coast road that skirts the harbour was extended after the earthquake, where previously many houses had gardens that stretched to the waterfront.

Unfortunately all of the information accompanying the earthquake photos was in Greek and I wished that there was an English translation so I could understand more about this fascinating aspect of Zakynthos history. In the entrance hall of the museum you can see a model of Zante town as it was before the earthquake where you can trace some of the changes that have taken place.

The Zakynthos Museum is mainly a place for lovers of religious art works but if, like me, you have a family who would rather sit in a café with a frappé or an ice cream, then there are any number of elegant cafes just off the Solomos Square nearby to leave them while you have a look around.

More things to enjoy on Zakynthos