Photos from Notre-Dame in Paris 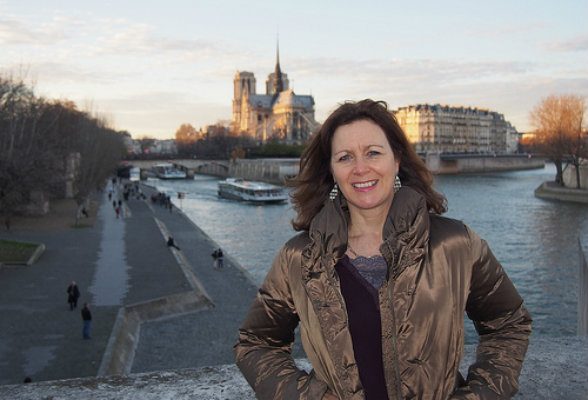 Built at the very heart of Paris, the Cathedral of Notre-Dame never seemed to be far away on our recent weekend in Paris. If I’m counting, we must have passed the cathedral or caught sight of it at least ten times as we made our way around Paris. As we arrived in Paris, this was where the train left us and the Metro picked us up after our flight to Paris with Air France on Friday night. We didn’t go into the cathedral as we had other things we wanted to see and I was feeling a bit dismissive of tourist traps and tick list sightseeing. Now I rather wish I had braved the crowds and taken a look around, as Notre-Dame seems to hold a power over the Seine and the city and to draw you in. I’d like to share with you a few photos of Notre Dame in Paris and the different views that I enjoyed as we wandered around the Cathedral.

Update April 2019: After the terrible fire, I hope these photos of Notre Dame will help us remember the cathedral in all its beauty, as the foremost Catholic church in France, the heart of Paris and a place of special significance for the French people. 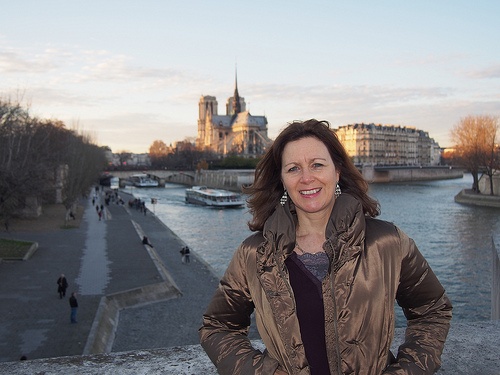 Notre-Dame Cathedral in Paris at Sunset from Pont d’Austerlitz

Our first pass of Notre-Dame was on our way to Ile St Louis where an old friend has a gallery on Rue Saint-Louis de l’Ile called Galerie Kara, selling elegant sculpture, jewellery and artizan pieces from India, Nepal and other parts of Asia. We walked past the imposing western facade of Notre-Dame where crowds of tourists were gathering and a queue was snaking its way into the Cathedral, which is free to visit. 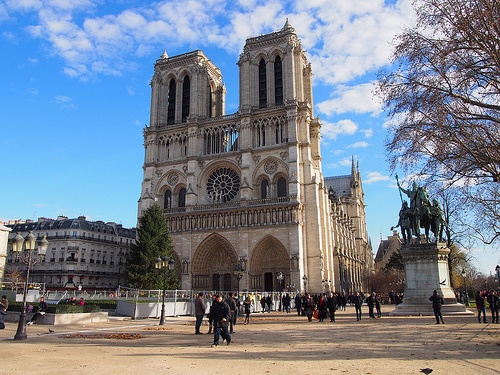 It was slightly disappointed that the garden immediately in front of the cathedral was fenced off making it look something of a building site. Otherwise the cathedral, which dates back to the 12th century was looking beautifully preserved with the white stone that was quarried nearby on the Left Bank looking pristine, as a result of a 10 year cleaning project. 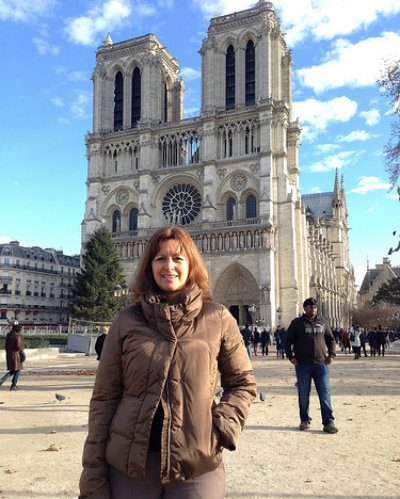 In front of Notre-Dame cathedral, Paris

Looking up as we passed the Western facade, I paused to take a photo of the carved stonework, the figures of the 28 Kings of Judah and Israel looking down on us, which had to be replaced after being destroyed during the French Revolution, and the arched portal with carvings showing the Last Judgement. 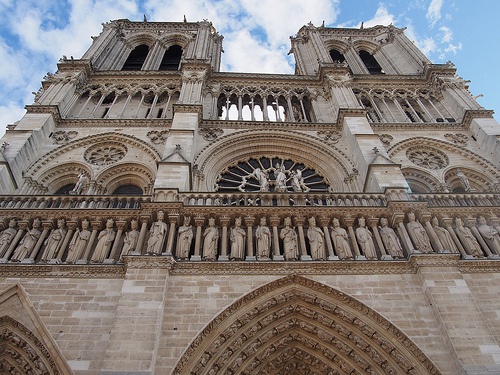 Down the north side of the cathedral we passed another queue to visit the tower and upper parts of the western facade. Behind the cathedral we walked through the pretty square of Jean XXIII where groups of scouts were sitting having a picnic on their day out and we could get the best view of the flying buttresses that were built to support the chancel of the cathedral. 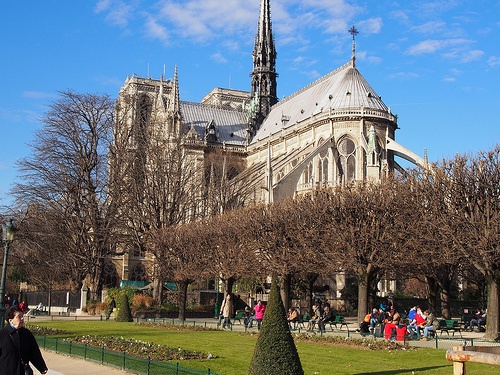 One of the places I particularly wanted to visit was Maison de Victor Hugo, the former apartment of the famous French author in the lovely Place des Vosges. His famous Gothic novel, The Hunchback of Notre-Dame was published in 1831 and tells the story of the hunchback, Quasimodo, who is the cathedral bell-ringer and falls in love with the beautiful gypsy singer Esmeralda. Walking back we followed the Canal Saint-Martin from Bastille and took the peaceful footpath beside the Seine, from where we could look back along the river towards Notre-Dame on the Île de la Cité. 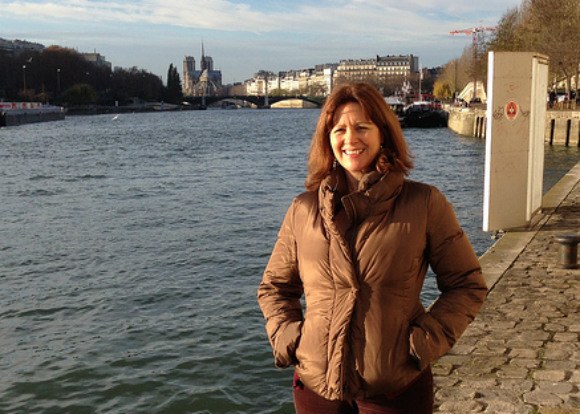 Footpath beside the Seine looking back to Notre Dame in Paris

We walked quite a way before we found a place that we could cross at Pont de Tolbiac and made our way on the Rive Gauche back along Quai d’Austerlitz with the winter sun lighting up the buildings by the river and the sightseeing boats passing up and down. 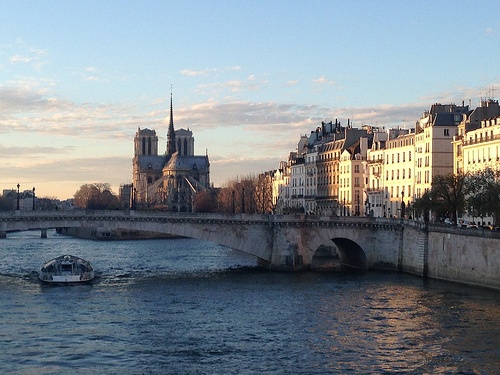 Notre Dame on the Seine in Paris

Our walk back took us past Pont de l’Archevêché, a footbridge that crosses to Ile de la Cite which is known for the padlocks that now encrust the wire fencing of the bridge like barnacles clinging to the rocks. These ‘love locks’ which are found on a number of bridges around the world, like the Ponte Milvio in Rome, and are there to symbolise eternal love. Lovers write their names on the padlock, attach it to the bridge and then toss the key into the river, so that the lock can never be removed (until the local council makes an occasional purge on grounds of architectural damage or some other unromantic pretext). 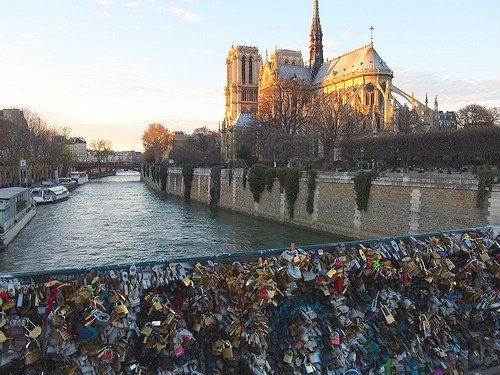 Our walk continued, past the book-sellers on Quai de Montebello until it was getting too late and we hopped on the Metro to take us back to our Hotel Pullman Montparnasse, as we had an evening engagement. Having been impressed by the size and power of Notre-Dame from so many different directions I won’t be so quick to dismiss it as a tourist trap – perhaps on my next visit to Paris I’ll even take a look inside.

All the Paris posts

Our hotel room with a view – Review of Hotel Pullman Paris Montparnasse with video
The fresh taste of Paris – our tour of Marche d’Aligre with Viator
Dine with the locals in Paris (via Guadaloupe) – with Cookening
25 delicious food tips in Paris – from top bloggers and Paris locals
Our winter weekend in Paris – the food, the sights, the video

Visitor Information for your weekend in Paris

Flights: Heather and Guy flew with Air France from Bristol to Paris – thanks to Air France for providing Heather’s flight. There are several flights per day with Air France to Paris Charles de Gaule Airport from London Heathrow and other regional airports.

Getting from the airport: The best value and quickest way to get from Charles de Gaule Airport (also known as Roissy) is to take the train directly from the airport station (a 10-15 min walk from the arrival gates). We bought a ticket at the machine (around €9.50 one way) in the station which covered our journey on the RER regional train to central Paris, with an easy change onto the Metro to take us to our hotel. The whole journey was around 1 hour from CDG Airport to Montparnasse. An alternative which might suit you if you are staying near Montparnasse is the Air France ‘Les Cars’ Airport Bus which drops you right opposite the Hotel Pullman Montparnasse where we were staying (around €16.10 one way). The Paris by Train website has useful information about getting to and from the airport by train.

Getting around: We found the metro to be an easy and convenient way to get around and all tickets are valid on metro and buses so you can keep your options open. We considered buying the Ticket Mobilis day passes but were glad we didn’t in the end as we found that a ‘Carnet’ or book of 10 individual metro tickets (€13.30) lasted us both for the weekend, as we only took 1-2 Metro journeys each day and walked to many places as the weather was good. Information about Metro options here