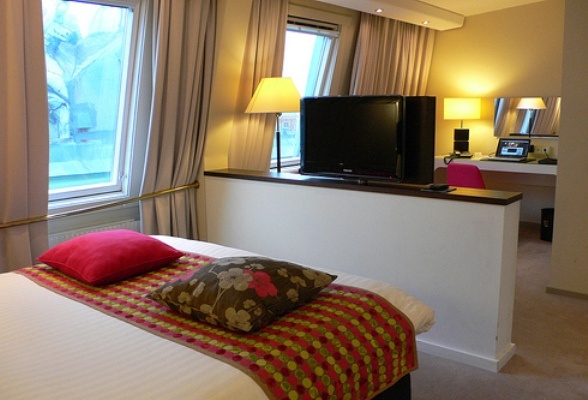 On the roof of the Hotel Elite Plaza in Gothenburg sits the statue of Mother Svea, the warrior princess who personifies the Swedish nation, with shield on one side and lions on the other, ready to repel all those who might dare to invade her beloved homeland. From our room on the 5th floor just behind the statue, we had the same view as Mother Svea, over the green copper rooftops of the elegant buildings nearby and towards the nearby canal or moat that surrounds the central quarter of the city. 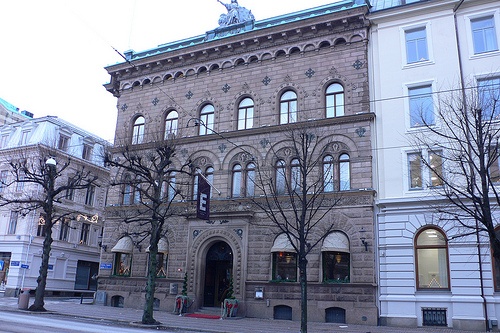 The statue belongs to the time when the building was the office of the Swedish Fire and Life Insurance company, Svea who commissioned the building in 1890 bringing in all the specialist firms in the city to create a grand and solid building that was designed to impress. Clearly no expense was spared in the fine decorative stonework exterior, the marble columns and stairways, the patterned terrazzo flooring and sparkling chandeliers.

The Elite Plaza’s reception hall to the left as you enter was once the main insurance office and you can still stay in the luxurious Svea suite with beautiful wooden panelling which was once the private apartment of the General Manager, who could ascend his own private staircase like the emperor of this insurance empire. In the 1920s the building was expanded with the open atrium of the Florentine hall and later became part of the University of Gothenburg before being turned into a hotel in 2000. All this turn of the century elegance is far from stuffy and there’s a modern twist with designer furnishings and striking artwork around the public areas on the ground floor.

If you can’t see the video above of Hotel Elite Plaza Gothenburg, view it on my blog here
Download Gothenburg – Hotel_Elite Plaza-Video [MP4]

After a long evening travelling from London Heathrow with Scandinavian Airlines we had arrived to find thick snow at the airport, but as our taxi got closer to the centre of Gothenburg it had turned to a light sheen of sleet on the pavement. After such a journey we were relieved to be welcomed into the hotel and directed to the glass lift that took us straight to the 5th floor once we scanned our key card – impressive from a security point of view but slightly irritating when it’s magic powers ran out on the morning of our departure. We were relieved to sink into our bed with one of those extremely comfortable memory foam mattresses and slept soundly to the distant rumble of trams in the street below. 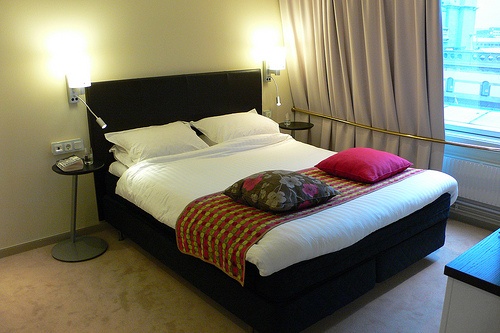 The next morning we had a better chance to check out the hotel before venturing out to discover what Gothenburg had to offer. Our superior room was a modern classic under the roof with sloping windows lined with silky soft curtains held in place by a brass rail. Living in a draughty old house as we do, we found the room on the warm side but luckily the large glass windows could be opened at the top to allow some fresh air. The neutral tones were highlighted with accents of deep pink and beige which I loved and rather wished I had a scarf like the pink and lime figured velvet throw on the bed. The room was a good size but divided by a low wall to mount the flat screen TV so that we could watch some trashy old movie while tucked up in bed – something we’d consider far too decadent to do at home but love to indulge in when we are away in a smart hotel. 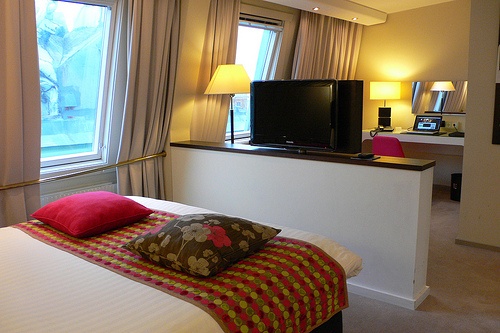 The other half of the room had a low arm chair and work area with a well lit modern white desk and an internet point with free internet access. As you can imagine the Internet was in regular use and I found it to be very fast which is always good to find even if you just want to check the opening times of a museum. I also used the wifi in the hotel to check things on my i-phone but found it a bit of a bore that I was given a handful of paper slips with impossibly long passcodes that only lasted a few hours – although at least we weren’t being charged for the wifi, unlike many luxury hotels.

We loved the bathroom which combined classic white marble tiles and a black granite vanity surface with modern sink and bathroom fittings. The bath was so long that I could barely touch the end, a great bonus for Guy who is over 6 feet tall and we both appreciated a long hot soak after our days out and about in Gothenburg dodging the blustery showers. There were plenty of nice toiletries and white bathrobes with a wired in hair dryer beside the large basin mirror, although there was a loose marble tile that had come away leaving a hole at the bottom of the bath. The flat fronted wardrobes blended into the wall but when open contained plenty of hanging and shelf space as well as an iron and ironing board, safe and mini-bar. 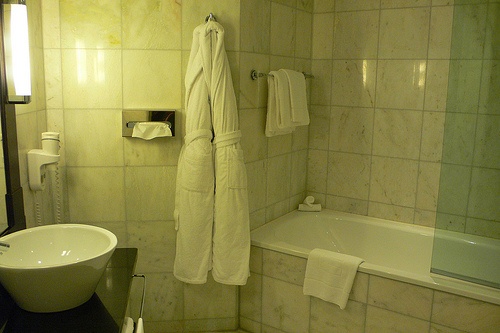 After a good night’s rest it was down to breakfast served in the large Swea Hof restaurant which is  set in a former internal courtyard with a glass roof with dark green metal supports and walls of decorative plasterwork. The walls were painted in milky coffee shades with a black and white checkerboard tiled floor and softly padded dining chairs. The colour was provided by red figured velvet curtains sweeping across the inside of the doorway and banners of colourful artwork down the side of the building, with large modern still life paintings like the bowl of lemons or a montage of giant lilies.The dark green woodwork continued around the open kitchen with slightly art deco style light fittings and enormous cream shades hanging from the ceiling, the overall effect being of comfortable modern luxury. 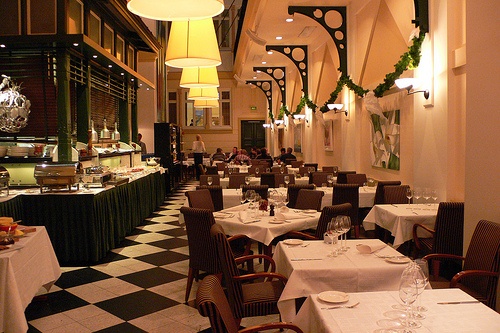 We really enjoyed the huge variety and quality of the breakfast buffet with everything you might wish for from nutty brown bread to local cheeses to fresh fruit, pastries and cereals. The only fault I could find was that the coffee was from a machine which seemed a bit unusual in such a high class hotel and you had to pay extra if you wanted something freshly brewed. We returned later to find that the hotel was offering a traditional Christmas table of Julbord which included all the foods that you might eat at Christmas especially endless varieties of smoked salmon and herring, with cured meats and pickles too.

The 5 star Hotel Elite Plaza is very well located in a central neighbourhood of Inom Vallgraven and as Gothenburg is not too large you can walk to most of the places you’d like to see or easily hop on a tram for any longer journeys. Turn left out of the hotel and you walk northwards to cross over the canal, passing the City Museum where we found some delightful gifts in the their shop to bring home. A little further and you’ll arrive at the Kronhuset, an old artillery store which is one of the oldest buildings in Gothenburg, set in a pretty courtyard with several craft and gift shops and the delightful Cafe Kronhuset which is a favourite spot for Swedish open sandwiches or a Fika coffee break with cakes and buns.

Soon you’re in the harbour area with the Maritiman outdoor Maritime museum which opens from April-October and the Gothenburg Opera house, also built on a maritime theme with the nearby Lipstick tower where you can get a bird’s eye view from the 22nd floor. Turn right out of the Hotel Elite Plaza and you’ll walk south down the main street of Västra Hamngatan passing the cathedral and exploring the network of small pedestrianised streets filled with interesting fashion and home-ware shops. Soon you reach the circle of canal where you might like to pop into the Feskekörka fish market (literally the fish church) where we had lunch at the wonderful Restaurant Gabriel or the glass roofed Stora Salluhallen food hall to do a bit of tasting and buying of lovely local Gothenburg delicacies. 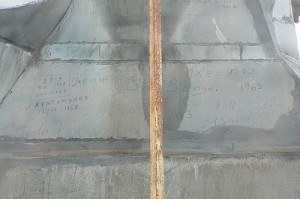 Graffiti on the back of Mother Svea

Cross the bridge and you’ll be walking down Kungsportsavenyn or Avenyn (the Avenue) for short where there are plenty of bars and eateries and you’ll end up at the Gothenburg City of Art or can hop on a traditional wooden tram to take you the few stops on to the Liseburg Amusement Park. If you plan to do a lot of sightseeing it’s worth investing in a Gothenburg city card which will provide free entry to most of the city attractions as well as public transport and city tours thrown in. You can walk from Avenyn to the old working districts of Haga and Linne with pretty traditional houses and cobbled streets where you can browse for unusual gifts in the arty and vintage shops and we stopped for a well-priced seafood lunch at the Sea Bar, Sjobaren and later had a cosy coffee and enormous cinnamon bun at Cafe Kringlan.

We loved returning after our days of exploring Gothenburg to our cosy rooftop room at Hotel Elite Plaza where we had the perfect view of the back of Mother Svea as well as the rooftops of Gothenburg. The warrior princess must have had a face lift in the 1960s as we could clearly see the workmens’ signatures and dates on the back of the statue. Many of the hotel rooms are being renovated through the first half of 2012 which will bring an even fresher look to this lovely classic luxury hotel, but we hope that Mother Svea will remain to cast an approving eye over it all. If you’d like to stay with the same view of Mother Svea be sure to ask for room 504.

The hotel is a member of Design Hotels and it’s worth also checking their website for any special offers. You can also compare prices and book for Hotel Elite Plaza and other Gothenburg Hotels.

More things to enjoy in Gothenburg

Visitor Information for Gothenburg or Göteborg