Tunis and Carthage – Day 6 of my MSC Mediterranean Cruise 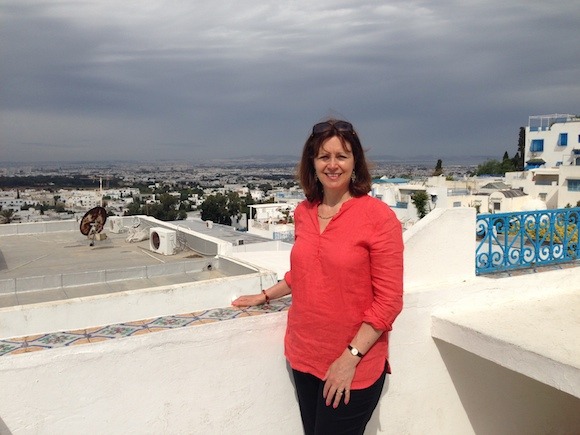 Day six of our Mediterranean Cruise with MSC Cruises took us from Europe to Africa in just a few hours as we arrived in Tunisia. The modern port of La Goulette where the MSC Splendida docked was a 15 minute drive from the centre of Tunis and we had pre-arranged a private taxi to take us sightseeing for the day.

Just outside the cruise port we met our taxi driver, Mr Faouzi who took us first visit the pretty village of Sidi Bou Said, which was a 15 minute drive up the coast. The village is known for its picturesque white houses with blue painted doors and windows and is known as the Santorini in Tunisia. We arrived before most of the coach excursions with the souvenir stalls in the pedestrianized main street just starting to open. 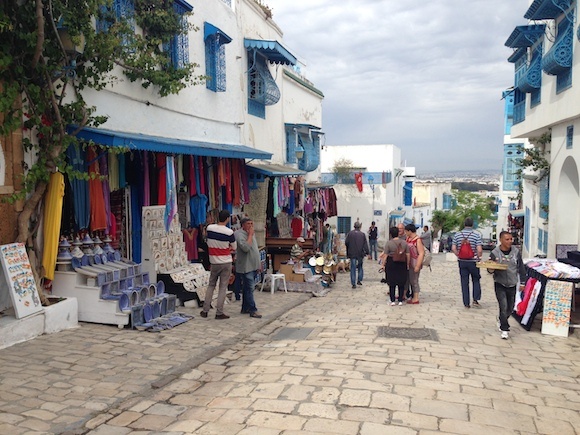 Walking up street, we admired the pretty white and blue houses, every so often exploring down a side alley to investigate a hidden courtyard, old studded door or building draped with pink bougainvillea. We could see below us a small harbour area and the MSC Splendida at the port in the distance. We passed a few cafes and smart hotels with terraces overlooking the sea and at the end of the road was a viewpoint, where the path continued down the hill to the harbour. We retraced our steps, just as the cruise excursions were arriving and took a look around the small Dar El-Annabi Museum (€2.50 entrance).

If you can’t see the video above from our visit to Sidi Bou Said and Carthage, view it on my blog here or on YouTube here

This traditional house was built at the end of the 18th century and used as a family summer residence, but is now open to the public showing scenes from Tunisian life. The house had been set up as if preparations were underway for a wedding, with figures in Tunisian costume showing the bride being decorated with henna and receiving guests with her family. The internal patio at the entrance was decorated in Andalucian style, with a central fountain, flowering jasmine and bougainvillea and stairs up to a terrace with a panorama over the town. Through the big studded door were sitting rooms with figures in costume, leading to a large open courtyard where an underground cistern collected rainwater from the roof. We really enjoyed this insight into Tunisian life and highly recommend the museum for those interested in local culture. 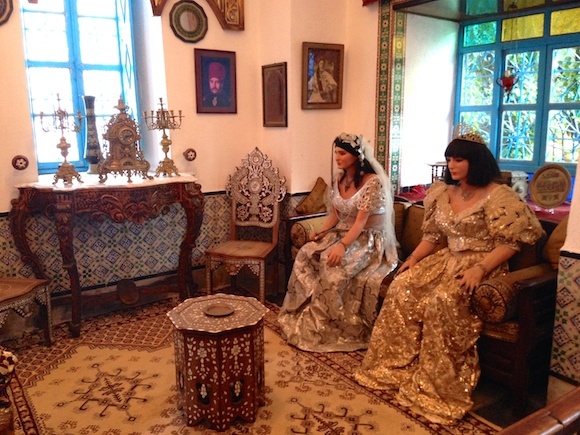 Next on our taxi tour was the visit to Carthage, which is not a single site like Pompeii but a succession of different sites with residential and shopping areas in between, so it would be difficult to see them all without a car. The legendary city of Carthage was founded in 814BC as the capital of the Punic Empire and exerted influence over the whole Mediterranean for many centuries. The empire’s power waned during the Punic wars, fought between 264 and 146 BC when military commanders such as Hannibal were unable to avoid defeat by the Romans. Although Carthage was destroyed during this conflict, it was later rebuilt by the Romans and became the third largest city in the Roman Empire. Later the city was conquered by the Vandals, Byzantines and Arabs and fell into oblivion until archaeological excavations were begun in the 19th century and it was declared a UNESCO World Heritage Site.

Our tour started at the Carthage Museum where the ticket (cost around €5) gave us entrance to all the different sites. The museum is situated at the top of the hill of Byrsa that was the site of the Roman Forum, with a commanding view over the ancient city and the sea. We had a look around the museum with some fine mosaics and larger statues from the site. Outside were gardens with fallen columns and their decorative pediments and we could also see the remains of Punic houses built on the slopes of the hill. 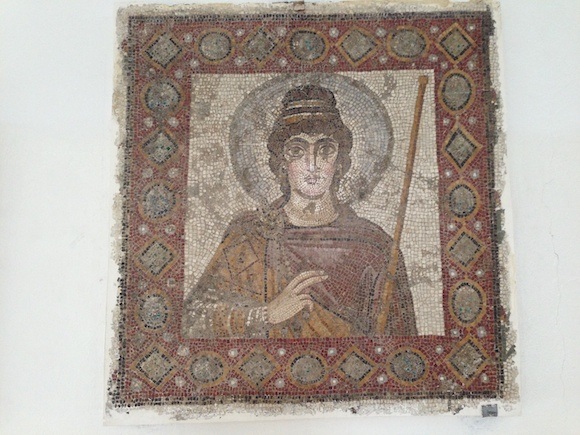 Mosaics in the Carthage Museum

Next we drove to the Roman Amphitheatre, which had a capacity of 40,000 people and was used to stage gladiator combats, circus games with wild animals and mock naval battles. Only the perimeter of the arena remains today, with some of the internal walls, broken columns and the underground tunnels.

The Antonine Baths was the largest of the archaeological sites we visited, in a beautiful location beside the sea. The baths covered a very extensive area, including the cold frigidarium, sauna or tepidarium and hot calidarium in a large complex with a central hall supported by columns and domed roofs. The site that you can see today consists mainly of the underground portions of the building made up of storage rooms and boiler rooms, with only a single column showing where the ground level would have been. 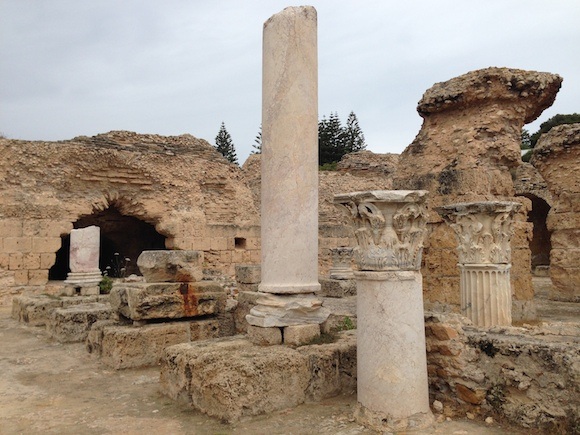 The Antonine baths at Carthage

The final stop on our tour was the Punic port which was considered a feat of engineering in ancient times. There were two communicating basins which can still be seen and we took a walk around the circular one with a central island where we could see the remains of the berths where war ships could be drawn up out of the water on wooden rollers. Now the basin is surrounded by desirable houses overlooking the water, with small boats moored up all around the perimeter and a few fishermen sorting out their nets. 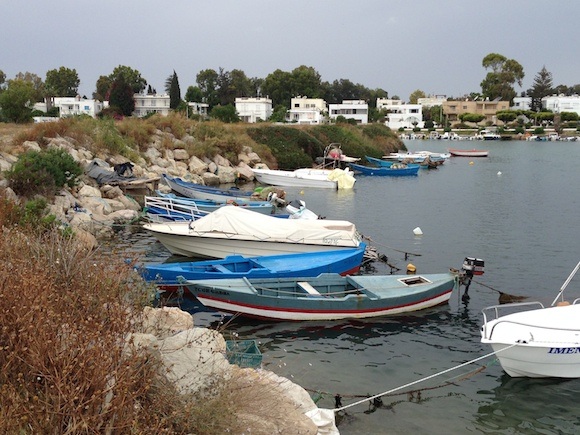 Boats in the Punic Port at Carthage

After our visit to the various sites of Carthage, we drove the 20 minutes into the modern town of Tunis, for a look at the old town or Medina. We stopped for lunch in a café on one of the boulevards in the centre of town, planning to afterwards walk into the Medina. The weather had been overcast and showery all day, but since it was now raining heavily we decided against our walk and asked our driver drop us back at the cruise port, where we spent the rest of the afternoon relaxing on board. 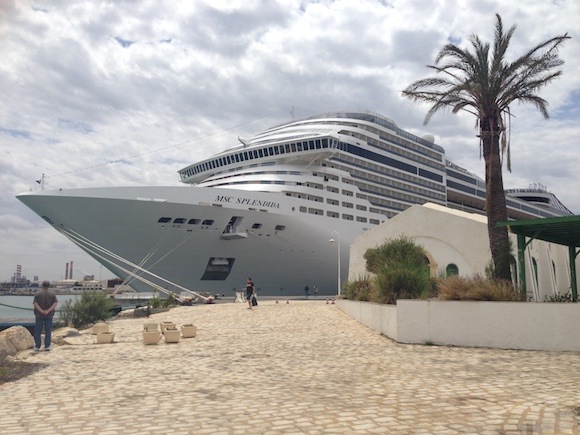 Tomorrow we have a day at sea as MSC Splendida sails back to Barcelona where we will end our week’s cruise.

Options for visiting the main sites of Tunis

The Historical and Cultural tour (4 hrs, £49 Adult) of Tunis features the archaeological ruins of ancient Carthage, ancient baths and a visit to Sidi Bou Said. The Beach Tour (4.5 hrs, £35 Adult) is trip to Gammarth, a lovely seaside resort a short drive from Tunis. If it’s shopping you’re after try the Shopping Tour (4.5 hrs, £45 Adult) to the old medina quarter and its traditional spice market with hundreds of stalls selling a huge variety of local produce. For a dose of colour there’s the History & Colours of Tunis (4.5 hrs, £42 Adult) tour to the Bardo Museum, a former 13th century palace famous for its outstanding collection of mosaics. Finally, choose Exploring the Colourful Souks of Tunis (4 hrs, £42 Adult) where you can stroll the streets of the medina for Arabian style shopping, admire the handicrafts and spices and visit a traditional carpet shop to learn about the history and traditions of the Berber people.

Other articles in my Mediterranean Cruise series

Thanks to MSC cruises who hosted Guy and Heather’s Mediterranean cruise. Heather and Guy travelled on MSC Splendida from Barcelona on a 1 week cruise calling at Genoa, Marseille, Naples, Messina, Tunis. Prices for a similar cruise start at around £700 per person. For more information, visit the MSC Cruises website or follow them on Twitter @MSC_Cruises_UK or on the MSC Facebook page.