Seven Ways to Commune with the Ancient Romans in Tunisia 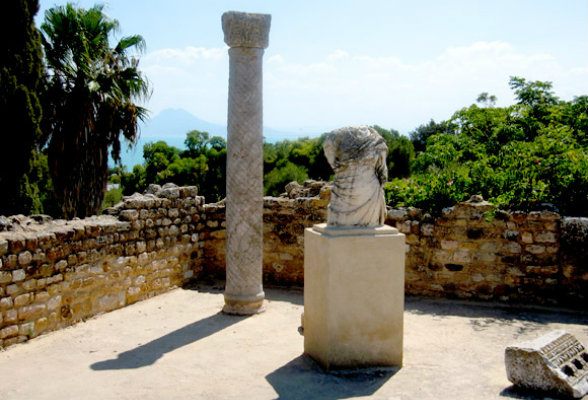 Our guest writer, Shara Johnson takes us to the Ancient Roman sites that she visited in Tunisia, finding a colosseum without crowds, beautifully preserved mosaics and an Roman Aqueduct to drive by. This is where you can enjoy the glories of Rome with only a few goats for company!

While anyone interested in glories of the ancient Roman empire may plan a trip through Italy, just across the Mediterranean sea, North Africa was known as the “breadbasket” of Rome. Here, wealthy merchants lived spread across Tunisia, leaving behind ample evidence of the typical Roman lifestyle.

I found ruins with detail and scale enough to impress, but most importantly, in refreshing contrast to so many of the Italian ruins, I found them in near solitude. Perhaps a man selling cactus fruits from a rucksack could be found on the premises, or some goats loitering in the weeds.

Because of the low tourist traffic, tile mosaics were fully intact in the floors of many ruins, statues still occupied their pedestals and niches, no ropes restricted my exploration. I could connect with these sites in a unique way – it was a playground for my imagination to take root in the silence and delve into the iconic ancient Roman life. 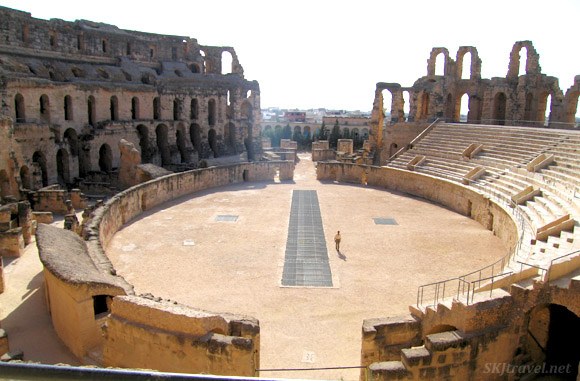 The Colosseum at El Jem in Tunisia

The Colosseum at El Jem

The Coliseum in Rome is typically the first image to spring to mind at the mention of Roman ruins. Though a splendor for its sheer size, it’s beyond overrun with tourists. The third-largest Roman coliseum can be found in east-central Tunisia at El Jem, not far from Kairouan. Here, unlike in Rome, the arena floor is completely intact along with all of the cells and corridors beneath it.

I huddled quietly inside some of the dark cells, imagining the fear and dread of what waited for me above as a prisoner or gladiator. I walked down the central corridor, prodded by an ancient guard, and up the steps. As I emerged into the blinding light of the arena, my heart was literally pounding with immersion in the past.

I walked into the middle of the arena all alone and looked to the empty stands, where the ancient crowds would have been cheering my gruesome death. I felt frighteningly small. I clapped my hands to hear how the lonely sound amplified, and realized thousands more hands would have been deafening. The architecture at El Jem was spectacular, the solitude was sublime.

The Roman town of Dougga

South of Tabarka, on the west side of upper Tunisia, it was easy for me to see why UNESCO has referred to Dougga as “the best-preserved Roman small town in North Africa.” I approached it from across a field still harboring artifacts beneath the matted weeds … I came not via a paved parking lot or a sidewalk strewn with arrow signs and vendors, but literally across a field, as if I were the first one to stumble across the abandoned city.

Triumphal arches, temples, baths, a theater, a mausoleum, and many other city components stood peacefully in the warm breeze. I tested the theater stage, an actor in soliloquy, with only ghosts for an audience. Throughout the city, headless statues stood, as if patiently awaiting the return of their upper anatomy.

The size of the temple pillars seemed accentuated by the silence in which they stood – you know, that lonesome kind of silence. When I left the city through a triumphal arch were soldiers once passed, a handful of flies were the only other visitors walking the dusty road. 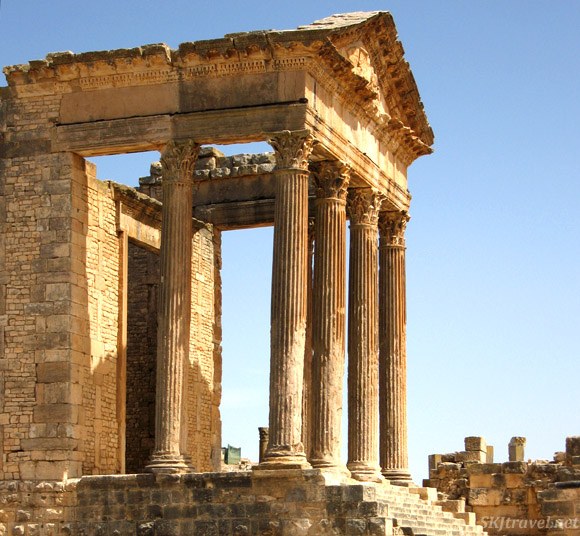 The Roman mosaics and villas of Bulla Regia

Located between Tabarka and Dougga, Bulla Regia was my favorite Roman ruin – a town of wealthy merchants who built their residences underground to escape the heat. Complete with fountains and courtyards, and many impressively intact tile mosaics on the floors, here more than anywhere I got a genuine feel for the opulence of the Roman upper class.

The quality of Bulla Regia’s preservation was excellent and no corner was off-limits to explore. The ruins were not even separated from pasture; goats meandered through the surface ruins. The solitude was seductive. In such a pristine atmosphere, walking on the same mythical figures portrayed in colored stone as the ancients had, my imagination had enormous latitude to transport me back in time.

Walking the residential corridors, I could almost feel the loose folds of a toga falling from my shoulders. 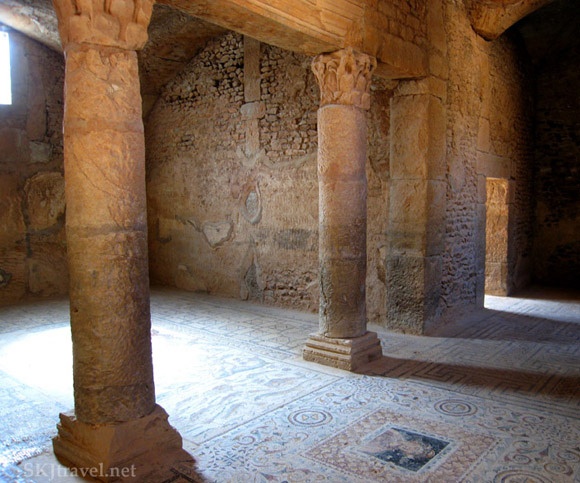 The Roman Villas and mosaics of Bulla Regia

The ancient marble quarries of Chemtou

Ever wonder where the Roman marble came from? Chemtou, just down the road from Bulla Regia, is one of the ancient quarries, unique for its highly-prized pink marble. I walked into some of the shafts, which got smaller and smaller until I had to crawl into the darkness. The walls were so coated with spider webs I felt a bit like Indiana Jones walking into an ancient cave.

Having wandered through the remains of so many splendid houses and temples, it was a nice change of pace to see the source for some of these Roman glories. The small town that housed the quarry workers still stands, in varying degrees of ruin, next to the river that carried the cut marble to port. 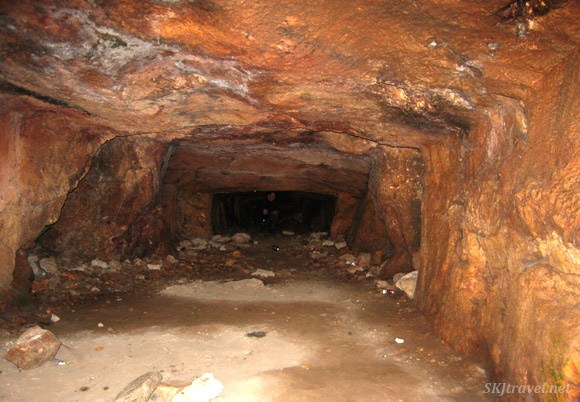 The marble quarries of Chemtou in Tunisia

The Roman city of Carthage

After the Romans conquered the Carthaginians, they completely rebuilt the capital city. The remains of Roman Carthage sprawl across the area surrounding Tunis. Here, finally, you will encounter a few handfuls of tourists at the primary ruins. Guidebooks will claim it a 2-day endeavor to see all the sites, but I can tell you, if you are motivated, you can see the entire spread in one day via train and foot.

The palace and museum, the massive baths, and the apartments overlooking the deep blue Mediterranean sea, are perhaps the most worthwhile if you want to select only a few. Other sites such as the creepy cemetery and the large cistern complex, add a depth of vision to the city and all it components. I relished in a frenetic day, falling into bed at night with a real appreciation of the scope of this ancient metropolis. 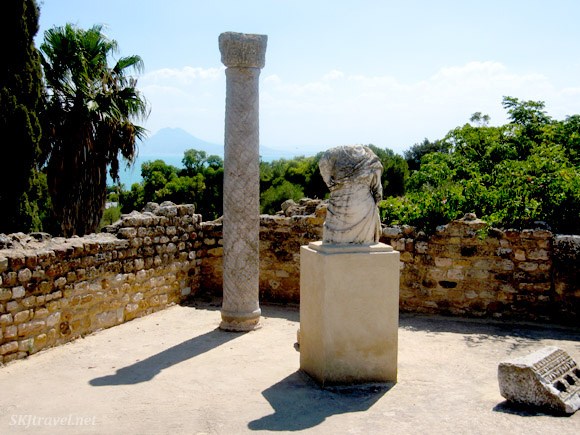 Visiting the Roman city of Carthage

Visit the mosaics in the Bardo Museum

Located inside a stunning former royal residence in the capital city, Tunis, the Bardo Museum boasts the richest and most refined collection of Roman tile mosaics in the world, all excavated within Tunisia. I spent hours in quiet awe, standing far away from some mosaics, bowled-over by their enormous size, standing way up close to others, scrutinizing the exquisite craftsmanship.

The palace itself is remarkable in its own right, with ornately decorated ceilings, making the whole Bardo experience truly special. In May 2012, the museum unveiled an extensive renovation. 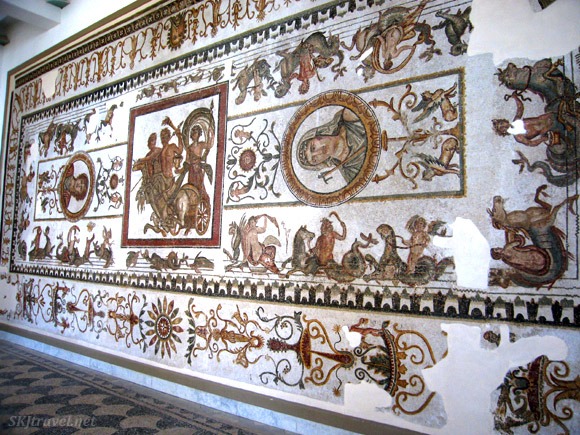 The Roman mosaics in the Bardo Museum, Tunisia

Drive beside the Roman Aqueduct

As Tunisia is littered with Roman ruins, even one of the country’s main highways follows a Roman aqueduct for miles and miles. At first I could hardly believe such an ancient and imposing structure stood so casually in the fields.

It has been rebuilt several times over the ages, but now large sections are missing and it is only a tribute to ancient ingenuity. Still, it’s pretty cool driving down the paved highway, channel flipping the radio, digital camera in hand, matching footsteps with modern marvels of millennia past. 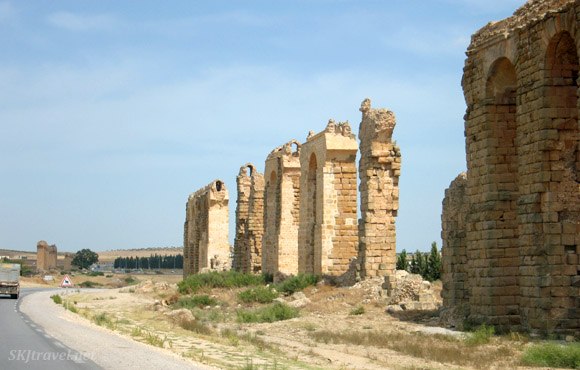 Some of the ruins showcased here require personal transportation to reach, but driving in Tunisia is not difficult (or you could hire a private driver). Once you get out of the handful of large cities, there is little traffic and it’s very straight-forward.

For the best independent experience in Tunisia, I highly recommend a 4×4 high-clearance vehicle, as it’s the only way to access some sites. People are extremely friendly and helpful. (Even if you get stuck in sand, they appear from nowhere with tractors, and if you appear lost in the boonies, they saddle their donkey and lead you out.) Relax, have fun, and be a Roman in Tunisia!

My thanks for this guest article to Shara Johnson, who lives in the Colorado Rocky Mountains. Her primary occupation is dreaming of where to travel to next. She writes literary essays and exhibits travel photography. You can follow her narrative travel blog.

Walking on the mountain of the dead in Siwa, Egypt
The ruins of an ancient town at Byblos in Lebanon
More than the pyramids – a grand tour of Egypt’s museums