Walking on the Mountain of the Dead in Siwa 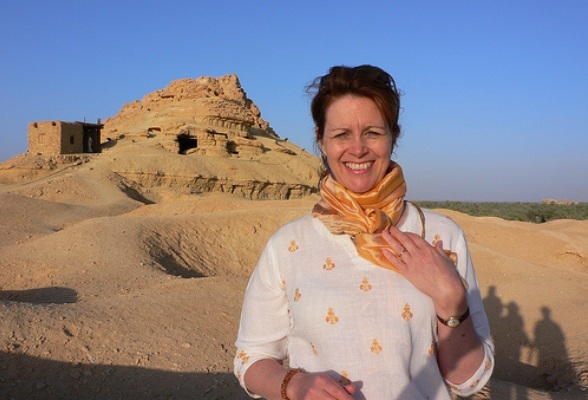 To add to the sci fi landscape of the Shali in Siwa Oasis, I must mention Gebel Al-Mawa or The Mountain of the Dead which I visited while I was in Egypt spring. This ancient Greek and Roman graveyard of Siwa is a hill where the soft sandstone rock is pockmarked with hundreds of holes that once housed tombs for the dead. 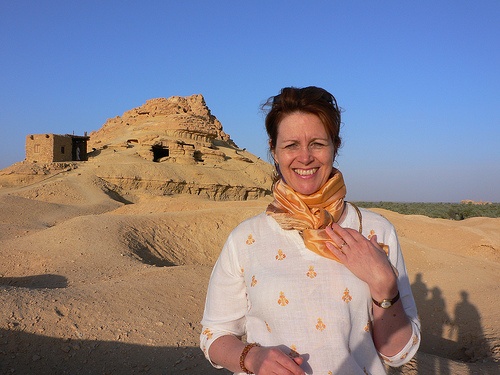 Heather at Gebel Al Mawta, the Mountain of the dead at Siwa

Over the years everything inside the tombs has disappeared leaving a cratered landscape on a hill and you can climb up to get a fantastic and windy panorama over the oasis. Any treasures have long since vanished at the hands of tomb-robbers although an old Siwa manuscript mentions a hidden tomb containing the treasury of King Khuaybish, the passage to which may be found through some long forgotten tomb.

If you can’t see the video above, view it on my blog here

We arrived in the late afternoon on our way to see the sunset from Fatnas Island, but found that because the ticket booth was closed for the day, we were unable to buy a ticket which would have allowed us a look inside some of the painted tombs that have been preserved. We had to come back the next day and the guide let us have a look inside, although I was not allowed to take any photos. 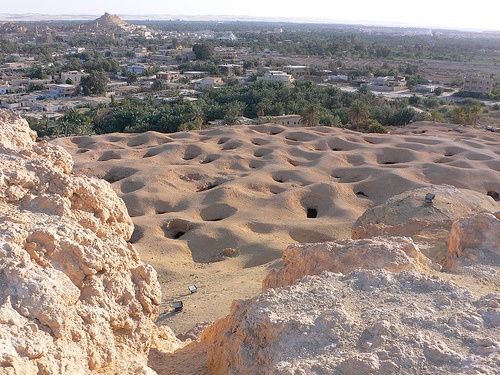 Gebel Al Mawta or the Mountain of the dead in Siwa, Egypt

There are four tombs that unlike the rest are locked up and must be viewed with the guide. Inside you can find painted chambers with alcoves where the mummies of different family members would have been placed. The walls and ceilings were covered in paintings in ochre, red and cobalt blue, of the Ancient Egyptian Gods and Goddesses and inscriptions about those who were buried within. 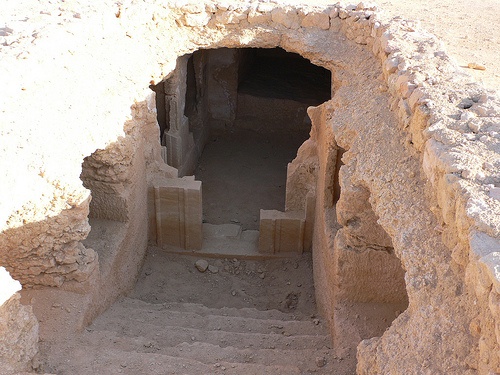 Tomb at Gebel Al Mawta or the Mountain of the dead in Siwa, Egypt

In more recent times, the empty tombs were used as shelters during the Second World War, when the German, British and Italian troops fought over this part of the Egyptian desert. You can easily visit Gebel al-Mawta on the edge of Siwa town and if you make a tour of the ancient monuments of Siwa, this will be included. I’d recommend coming with an English speaking guide who can tell you all about the Mountain of the dead, as there are no information signs.

Check for the best hotel prices in Egypt and book here.

The Siwa Sunset at Fatnas Island in Egypt
Date Palms and Donkey Carts – 8 things to see in Siwa Oasis
Sci-fi film or lunar landscape? – the Shali at Siwa Oasis in Egypt – video