Where to find the best Smørrebrød – in Copenhagen 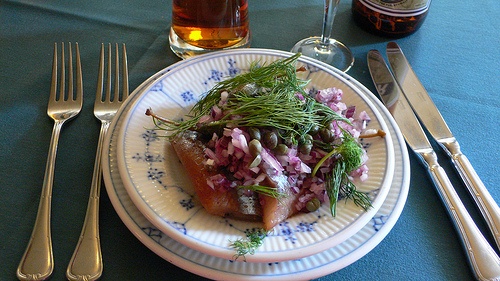 In anything epitomises Danish food, it must be the Smørrebrød. This open sandwich is made with dark rye bread topped with an endless combination of pickled herrings, cured meats and onions or salad and is not to be confused with the Swedish Smörgåsbord, which is more of a buffet style meal (better not mention the Swedes, Denmark’s old enemy) 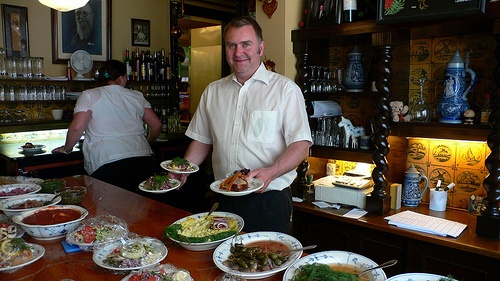 Copenhagen seemed the perfect place to seek out the Danish Smørrebrød and we started our quest at Slotskælderen hos Gitte Kik, a lunchtime only restaurant that is on an unobtrusive street corner, yet a stone’s throw from Amagertorv and close to where you take the DFDS Canal Tours. Down a couple of steps and you’re in a homely, packed restaurant where the owner Frank will talk you through the dishes laid out on the counter with the day’s specialities. This is the place to try the traditional style Smørrebrød with endless different styles of herring (we tried pickled, curried and fried) or combinations of cured meats, vegetables or paté as well as plenty of vegetarian toppings.

As the restaurant is just opposite the Danish Parliament building it’s a popular lunchtime haunt for Members of Parliament but even if the Prime Minister had been eating at the next table, I would have been none the wiser, although I can claim to have eaten in the same restaurant (at the same time) as Baroness Thatcher. I suspect that all those MPs really like Gitte Kik because the grandfather clocks, old fashioned pictures and cosy, low beamed ceiling remind them of a home-made lunch with their mother.

While we tucked into our plate of Smørrebrød, elegantly served on Royal Copenhagen bone china, our lunch companion Henrik educated us in the finer points of Danish table etiquete. As I love to try a little of everything, I thought that the Smørrebrød might be a bit like a Tapas where you all share a few dishes, but in fact it’s a rather polite one person, one plate affair – so no picking allowed.

You also need to remember that you should “swim before you fly” and eat the fish toppings first, then the chicken or poultry, although of course in these modern times people can please themselves . Most people would enjoy a beer with their Smørrebrød lunch but you’ll also be asked if you’d like a glass of chilled schnaps to wash down the herring – as they say in Denmark, “the fish has to swim”. You might also like to try that old favourite, Dyrlægensn natmad which translates as The vet’s night snack and is a topped with liver paté and a slice of corn beef, that the farmer’s wife would traditionally prepare for the vet to eat when he had come out to the farm to attend the livestock. 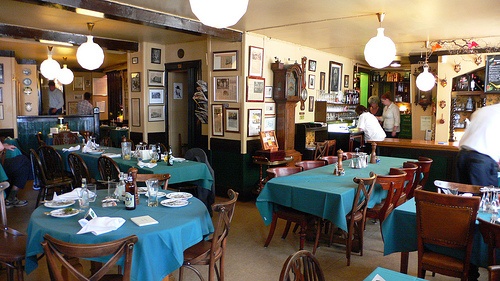 Then there’s the drinking etiquette which is even more tricky. Before you drink, be sure to shout a cheery Skål, clink glasses with everyone at the table and take a drink before you put the glass down. You can repeat this toast randomly throughout the meal as where the Brits might think that one toast is enough, the Danes apparently like to continue every time they raise a glass. Oh, and if you wonder why everyone is fixing you with a gimlet stare, it’s only because it’s considered polite to make eye contact with each person around the table as you clink glasses. 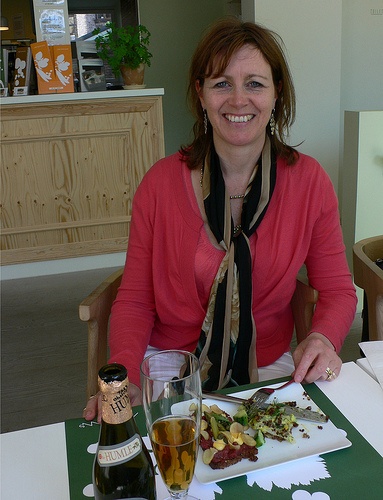 Smørrebrød at Aamanns in Copenhagen

This is because if you were drinking with your enemy in the old Viking days, you’d want to keep an eye on the amount he was drinking and keep him at table as long as possible so he wouldn’t be burning your house down when your back was turned. I found this trait of locking eyes with everyone I shook hands with a bit unnerving, as in England it would be considered rather rude to stare or make eye contact for too long.

The next place we sought out to try Smørrebrød was the Aamanns deli, a place that is as modern and fresh as Gitte Kik is cosy and traditional. It all started when chef Adam Aamans was looking for good quality ingredients to make packed lunches for his children to take to school and ended up by opening his own deli where they make everything for the sandwiches from scratch. I had a tear in my eye at such devotion, as I remembered sending my kids off to school with a bag of hula hoops, cheesy strings, pre packed mini pepperoni and a penguin bar (the best that Waitrose could offer of course!)

As we arrived at Aamanns in the mid afternoon things were winding down and we had the place to ourselves as we sat at one of the modern white cafe tables, having chosen our Smørrebrød from a selection at the Deli counter. It was all impeccably free range, organic and seasonal and looked very pretty too. I was trying to get my head around how you might get a take-out without the toppings flying around into an unappetising mess, but they have ingenious little boxes with partions to prevent that happening. I’d say that you could take out your Smørrebrød and head either for the Copenhagen lakes in one direction or to the local park in the other to enjoy your perfect open sandwich al fresco. 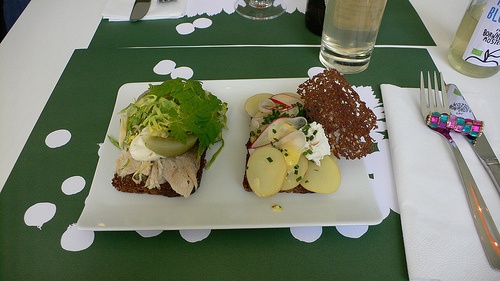 Smørrebrød at Aamanns in Copenhagen

Anywhere else you might try out  Smørrebrød in Copenhagen?

I’d have loved to check out the Royal Cafe on Amagertorv, through an archway between the Royal Copenhagen shop and Georg Jensen – it’s a funky cafe with a few tables al fresco in the small courtyard and specialises in Smushi – a miniature open sandwich that’s a cross between Smørrebrød and Sushi.

I was also recommended Restaurant Schønnemann by top chef Henrik Yde Andersen at Kiin Kiin who takes his father for lunch there each week – I reckon that if it pleases a Michelin star chef, then it’s worth checking out.

Do you have any recommendations for where to find the best Smørrebrød in Copenhagen?

More things to enjoy in Copenhagen

Where can you eat for 500 Krone in Copenhagen?
Modern Thai food with Danish style at Kiin Kiin in Copenhagen
Out of Africa and other Danish Stories – at the Karen Blixen Museum in Copenhagen

Thanks to Wonderful Copenhagen for sponsoring our weekend in Copenhagen.