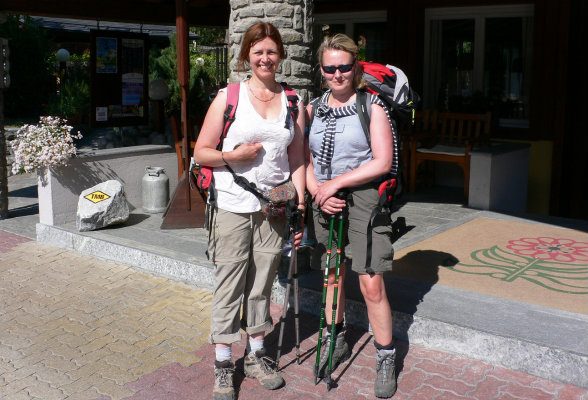 The forecast was good and my friend Julia and I were full of excitement to be walking for the third year on the Tour de Mont Blanc, as we set off from Chalet Bon Abri in Switzerland. We’d decided to walk this high mountain trail in stages, and each year I’ve kept a video diary of the trek. This is my 2012 Video Diary, published nearly a year after we actually walked it and just in time for the start of my 2013 walk which will see us (hopefully) finish the TMB. You can follow this year’s journey at #TMBwalk13 on Instagram, Google+, Facebook or Twitter as I post photos live from the Tour de Mont Blanc. 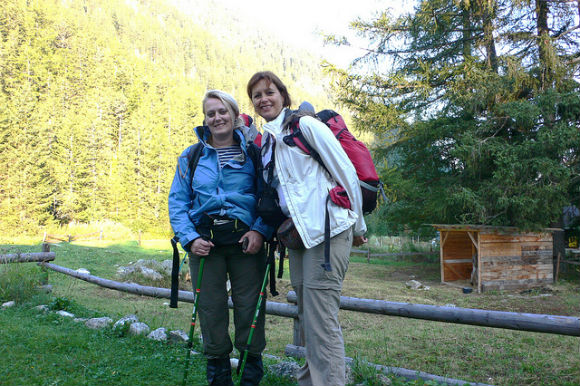 The start of our walk at Gite Bon Abri, Champex Lac

If you can’t see my video diary, view it here on my blog or on Youtube here

Our first day was a long one, although the terrain was easy with not too many steep climbs in altitude, as Julia had experienced some problems with altitude sickness the year before, so we wanted to acclimatise a bit. Past the lake of Champex we entered a shady wood which was marked as the Sentier des Champignons (Route of the mushrooms) with a charming menagerie of carved wooden animals and other sculptures along the route.

As the forest thinned, we passed through the pretty Alpine villages of Issert, Les Arlaches and Paz de Fort with attractive old wooden barns and houses in various states of repair. The way now skirted a river valley which was full of rocks and pebbles, with only a small stream of water in the middle, due to the controls of the hydro-electric dam further up stream.

That afternoon at La Fouly, a larger village with numerous cafes, we settled gratefully into the sunny outdoor terrace of the Auberge des Glacier for a well deserved glass of Orangina, before mustering the energy to walk the final hour up the valley to Ferret, the last village before the road ran out. On the balcony of our room at Hotel Col de Fenetre, I filmed my video diary. It had been a long, but not especially demanding day, through Alpine meadows and pretty villages, but tomorrow we would get away from civilisation and up into the high mountain trail. 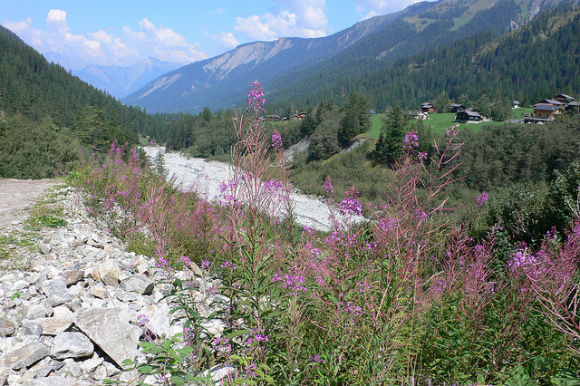 Heading for La Foully on the Tour de Mont Blanc

We left the hotel, climbing a muddy path and after an hour of steady walking, we could spot the hamlet of Ferret below us with the stony river and the road snaking along the bottom of the valley. A little higher at the concrete hut at the combe of Les Creuses we paused for some photos with a fantastic view down the valley.

Next the walk took us past the pretty dairy of Refuge at La Peule, where the terrace was full of pretty tubs of geraniums and we stopped for a drink of apple juice. The scenery was now becoming wild, with pretty yellow and purple wildflowers along the trail. The path took us on a steady climb up towards the highest point of our trek, the Grand Col Ferret at 2537M, which marks the border between Switzerland and Italy. On the ridge the wind was strong, but lying down we could soak in the sunshine and views over the valley below and the glaciers hanging above us.

On the Italian side of the Col we could see Rifugio Elena in the valley below us, which we reached by late afternoon. We were shown to our en suite twin room at the end of the corridor, which felt like luxury after a long and sweaty walk, and enjoyed a beer before dinner of pasta, pork chop and ratatouille followed by slices of jam tart. 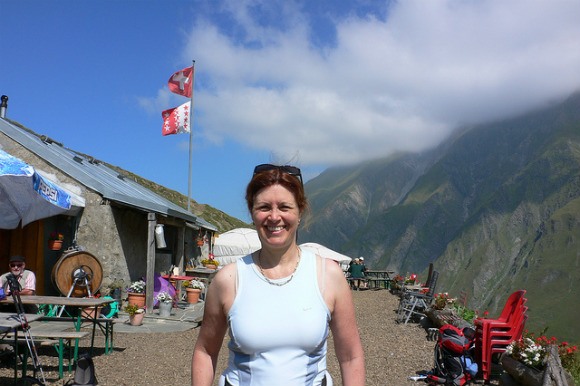 We left Rifugio Elena early, as the sun started to rise over the jagged peaks of Grand Col Ferret, the pass between Switzerland and Italy, that we’d crossed the afternoon before. In less than an hour we reached the bottom of the valley and stopped for a strong Italian coffee at the very pleasant Chalet Val Ferret, a small hotel with restaurant and garden cafe.

The muddy track snaked up behind the Chalet Val Ferret, but as we got above the treeline it became an easy, open path with views of the glaciers hanging on the opposite side of the valley below the rocky peaks. By late morning our side of the valley was bathed in sunshine and the balcony path gave us a grandstand view from one end of the valley to the other and the peak of Mont Blanc itself was in sight.

We passed a mule coming the other way, laden down with baggage for a small group of walkers and I felt rather jealous that they didn’t have to carry their rucksack as we did. We ate our picnic lunch with views of grey mountain peaks and glaciers backed by a blue sky, while from the bottom of the valley we could hear the river rushing and see it snaking along the river bed of shale.

By mid afternoon we rounded a spur and saw Rifugio Walter Bonatti, hanging above the valley. Another half an hour and we were on the sunny terrace of the refuge, enjoying a cold bear with the sun on our face, the perfect reward for our day’s walk on the Tour de Mont Blanc. The hostel is named after the famous Italian climber, Walter Bonatti, and was very nicely decorated, with vintage posters of climbing heros of the 1950s and 60s.

Read about the 3rd day’s trek – Mont Blanc from the Italian side, Rifugio Elena to Rifugio Bonatti 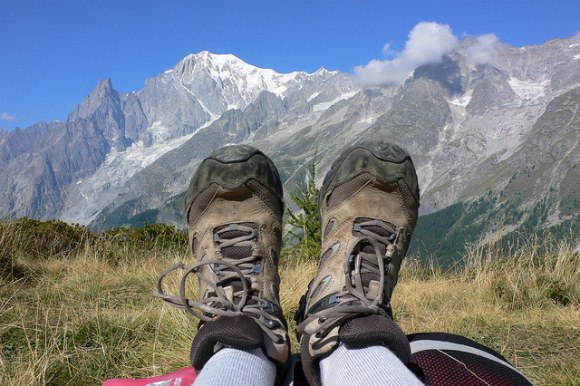 For most of the day we stayed high, walking along an undulating path with the Mont de la Saxe ridge on our left and the views of Mont Blanc framed by blue skies on our right.

By early afternoon we reached the end of the ridge and found a flat grassy viewpoint just above Refugio Georgio Bertone where we settled to have a late lunch with the ultimate view over the valley. There was a round metal table with all the different viewpoints etched on it and down to our left in the valley the town of Courmayeur now appeared. Before long our peaceful lunch-time spot became crowded with group after group of chattering Italians who spread out around us laughing and talking loudly.

Our feeling of being away from it all in the remote mountains was at an end as we started our final decent to the town of Courmayeur. The path below Rifugio Georgio Bertone led us steeply down through shady woodland and I was glad to have my walking poles to support my knees on the uneven path. 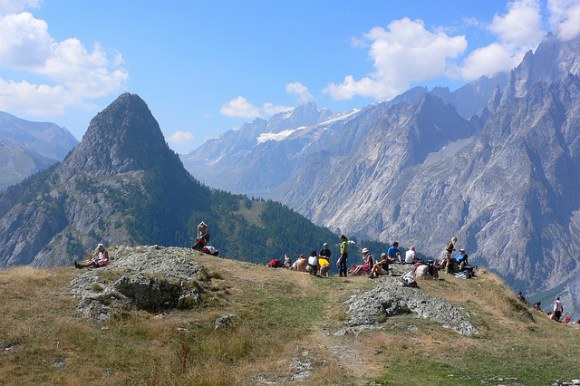 Above Courmayeur on the Tour de Mont Blanc

The path wound downward, downward until we reached a residential road and walked down it into the heart of Courmayeur where we found our Hotel Bouton d’Or, making sure to take a final “end of the TMB photo” as has we have done every year. This was journey’s end for this year at least, and the next morning it was time to take the bus through the Mont Blanc tunnel, back to Chamonix to pick up our airport transfer to Geneva.

As I write this in September 2013, I’ll shortly be leaving to start the final leg of my journey with my friend Julia as we head back to Courmayeur for 4 days walking to take us back to Les Houches where we started in 2010. I hope you’ll follow the journey through the photos I’ll be posting on Instagram, Twitter, Facebook and Google+ #TMBWalk13, and see if we make it to the end of our Tour de Mont Blanc. 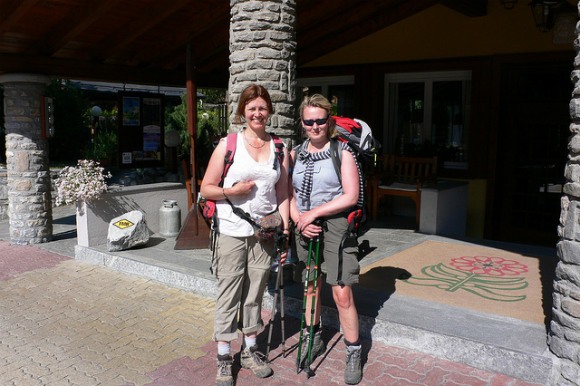 The end of our Tour de Mont Blanc walk at Courmayeur, Italy

We used the Cicerone Tour of Mont Blanc guide by Kev Reynolds – we found it to be an excellent guide for both the clockwise and anti-clockwise route with detailed route guide, maps, accommodation information and points of interest along the route.

My jacket and walking trousers were provided by outdoor clothing specialist, Ellis Brigham who have a wide range of mountain clothing and walking gear you might need for a trek on the mountains, which are available both through their website and UK stores.

We stopped at the following hotels and mountain refuges on our 2012 leg of the Tour de Mont Blanc;

Gite Bon Abri at Champex-de’en-Haut, Switzerland. We paid CHFR 76 per person half board in a 6 bed dorm room and the Gite may be booked in advance by e-mail.

Hotel Col de Fenetre at Ferret, Switzerland. We paid 95 CHF per person half board for a twin room with en suite bathroom. The hotel does not have a website but reservations can be made by e-mailing [email protected] Telephone. 027 783 1188

Rifugio Elena in Italy,  we paid had €57.50 per person half board for a twin room with en suite bathroom which cost. There is an e-mail address given on the website but we did not get any response and learned that it is better to telephone. Telephone (+39) 0165844688

Hotel Bouton d’Or in Courmayeur which is in the centre of town and 5 minutes walk from the bus station. Prices are  €75-90 for a single room and €100-150 for a double room including an excellent  buffet breakfast.

This article by Heather Cowper is originally published at Heatheronhertravels.com